The busy holidays are basically upon us.  Both my husband and I have work Christmas parties this weekend, plus we need to clean and wrap and figure out those last few gifts.  But the sun was out so I had to get outside and photograph for a few minutes at least.

I already got one of my Christmas gifts - because 'Black Friday' became 'Merry Christmas to me' when a long desired Nikon D7100 went on 'Lightening Deal' at Amazon.

The stars aligned for me to even know lightening deals existed, since my first visit to that part of Amazon was only two days prior.  Then during an attempt to see how it all worked I tried to click on something and was immediately 48th on the waitlist - so some stuff goes fast - lightening fast - what were the chances I could remember to be at my computer at the right time?  (During a couple of other items of interest I proved the chances of me remembering was very low).  But there was an 'unknown Nikon deal' coming up in four hours and somehow I actually remembered to sit down at my computer 2 minutes before the sale started.  Then when it turned out to be the camera I had wanted I clicked fast and it was in my cart.  Just like that.

(Then I had fifteen minutes to chat with my husband about "should I really buy"?  He kind of shrugged - probably knowing he really wasn't going to affect my decision making process.  The camera was 33% off - probably won't see that again until the camera has been upgraded once again - so a pretty good deal - why wait until March and pay full price?)

So then it arrived two days later - I love you Amazon Prime - you and your fast shipping and free streaming TV shows and movies.  There was, of course, a lovely blizzard which meant I stayed in the town where I work rather than drive through ice on the interstate - so it was an extra two days before I could open the box and admire my camera.  It took another day for me to connect the camera strap and charge the battery.  It took almost two weeks before I took my first tests shots.  (I also got a 'how to' book and the buttons are all different than on my Nikon D5100 - so I have to figure out how to do everything all over again.  Even in my half hour today, I ended up shooting all in 'auto' exposure because I couldn't figure out how to change my focal point.)

But it was a lovely day for skiing, and since I did not get out for any skiing, I let my Lego Minifigures out top play. (Picture composition is a little off, but it was the cutest shot of the bunch). 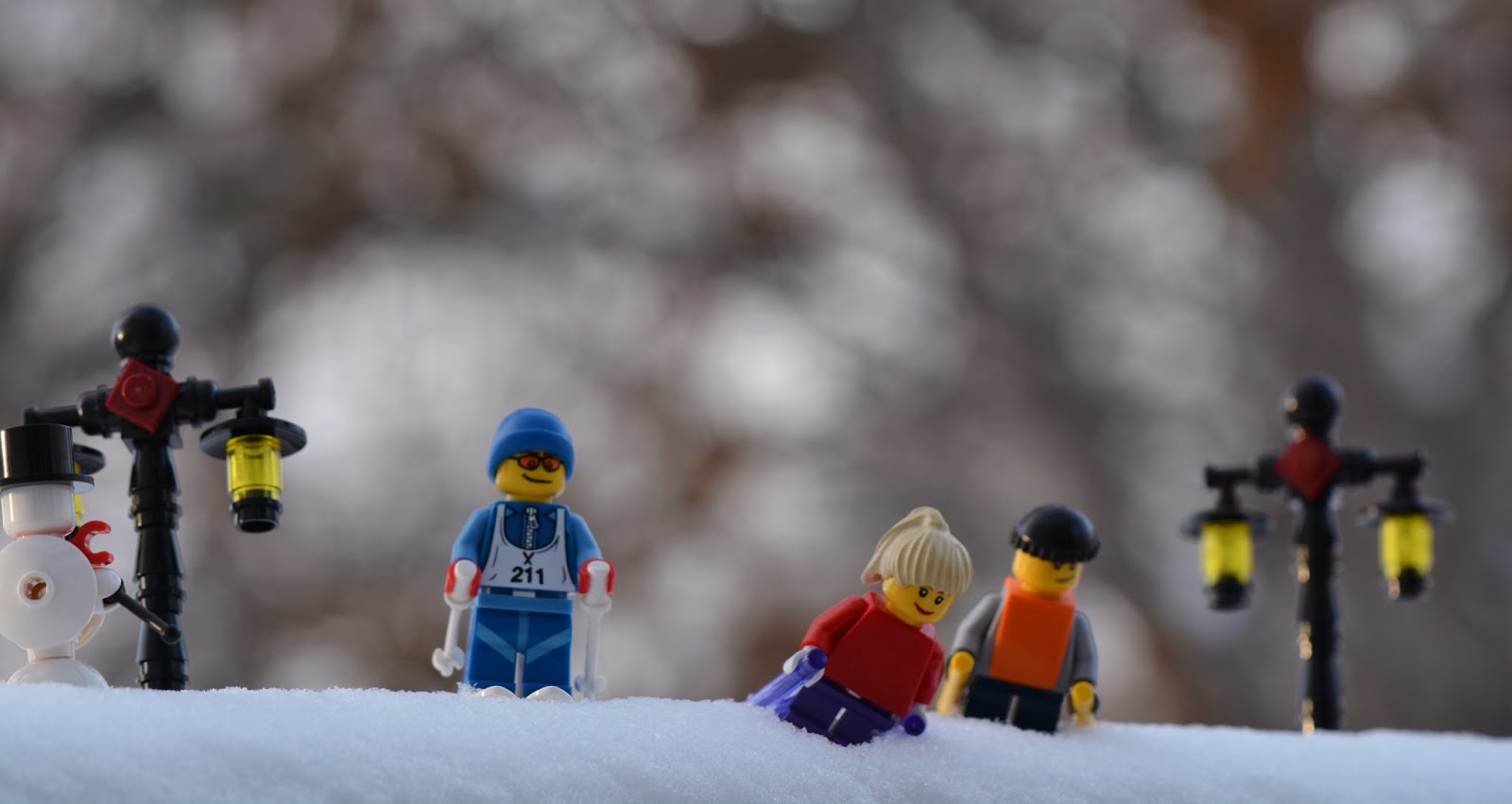 I think they had fun.

Now I'm going to go learn about my new camera.