My second and third day in China were spent wandering around the hotel while my husband worked.  We had seen some sculptures and a park nearby the hotel during the cab ride to Tianning Temple, so I figured my first goal was to find those.  (It'll take a long story before you'll hear again, so a preview  success!) 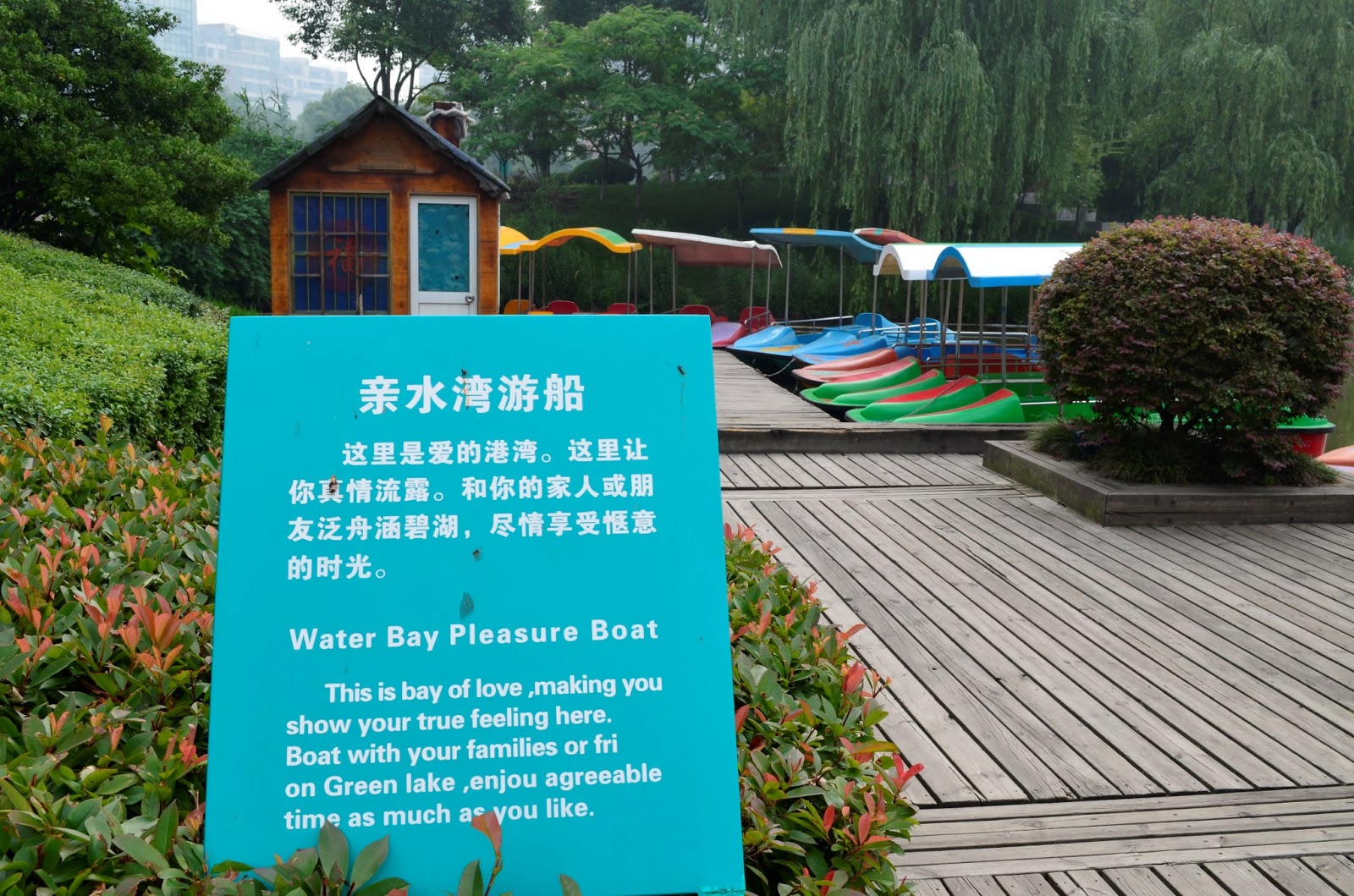 But first I had to cross the street.  Holy Moly.  Each direction had six to eight lanes for cars, another lane for mopeds and bicycles, and then there were pedestrians.  I had read that pedestrians do not have the right of way like they do in the US, so I knew to be careful.  There were lights for pedestrians at this intersections, and there other people I could cross with, so I made it across without incident.  But boy, it really is everybody for themselves.  The mopeds and bicycles especially, seemed to ignore the traffic lights, occasionally driving right out into traffic.  It was wild.  (This intersection actually had a traffic cop around 8 and 5 pm.  He gave harsh words to mopeds and pedestrians who failed to stop where they were supposed to, and I saw him give one car a ticket for turning when he wasn't supposed to.  So the government is trying to enforce rules.)  And that helped my comfort level during crossing.

The next intersection I got to was without lights for pedestrians, and the cross-walk was kind of crooked, and the some of the traffic signals were obscured by trees - so I couldn't see when the left turn was green.  I watched a couple cross the road and they stopped right in the middle to wait a while.  There was even this strange marking in the middle of the cross-walk like it was a spot for stopping.  But I wasn't sure I was up for standing in the middle of the road as cars whizzed right by me, so I turned around and did not make it across.  A photo of the intersection where I turned around is below.  (I obviously should have taken more time to look at the photo I shot before I turned around.  This photo shows absolutely no chaos, but I swear it appeared crazy and disorganized, and unimaginably dangerous.  If you look closely at how the cross-walk goes, you can see that it kind of seems to stop in the middle.  Plus the intersection is wider than it appears here too, I just wasn't brave enough try that first day out.) 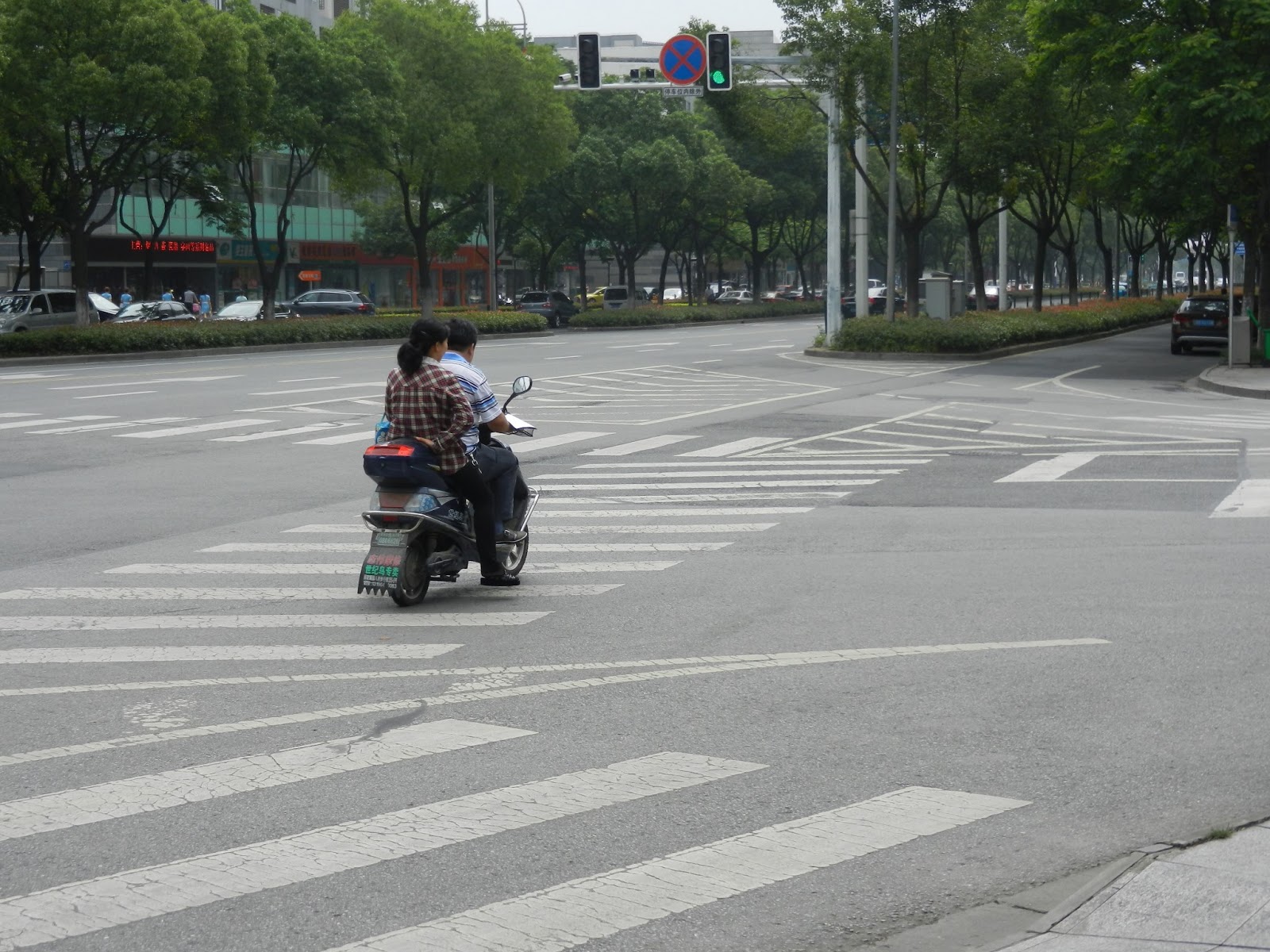 But I had made it across the first intersection, and I had actually passed a park I just hadn't been sure it was the right park.

But it was the right park and it was glorious.  It was so green, it had rose sculptures, and water, and tai chi, and a playground, and a small children's amusement park, and trees and flowers.  I must have walked for two hours on my first excursion to the park. 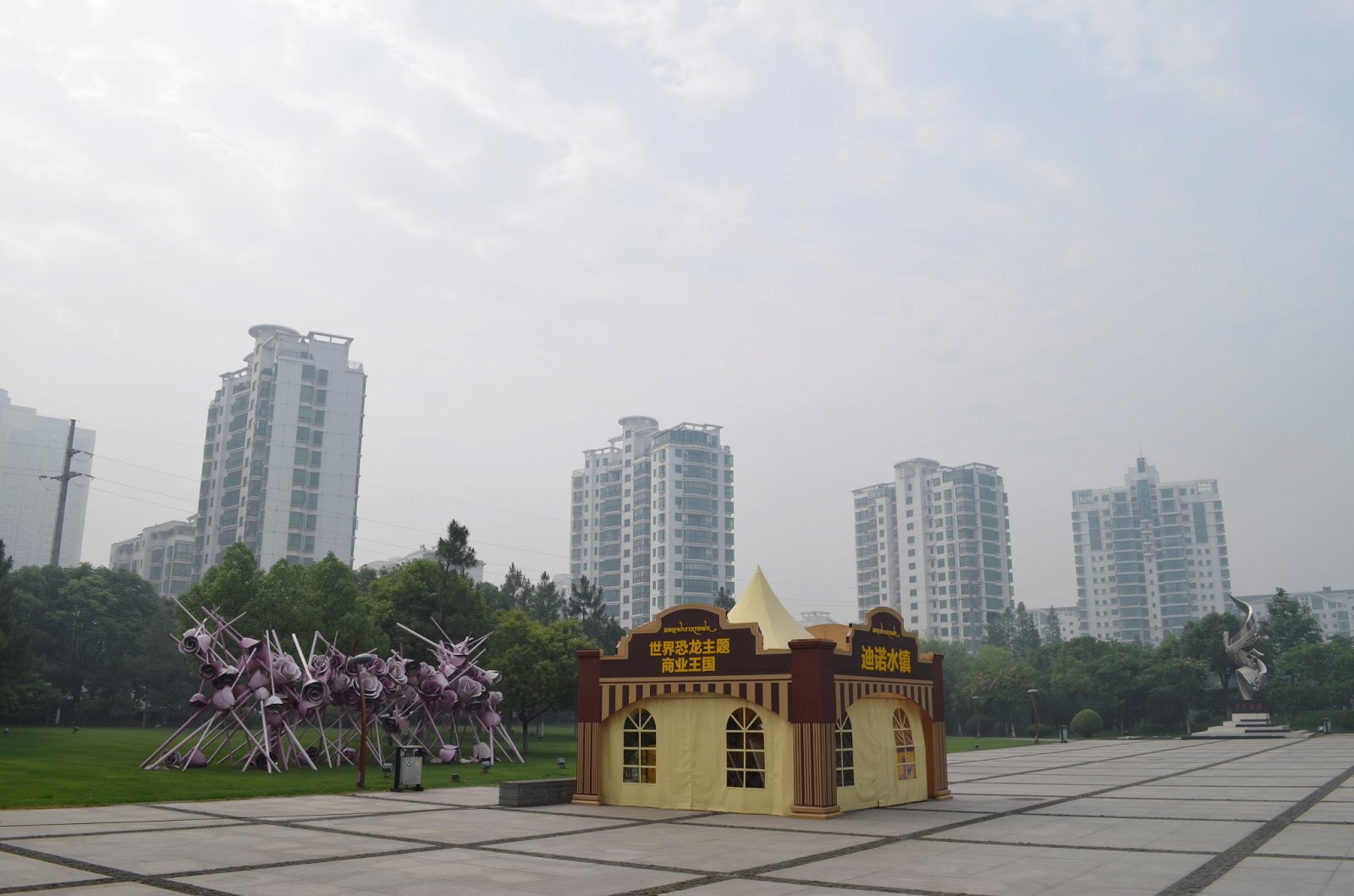 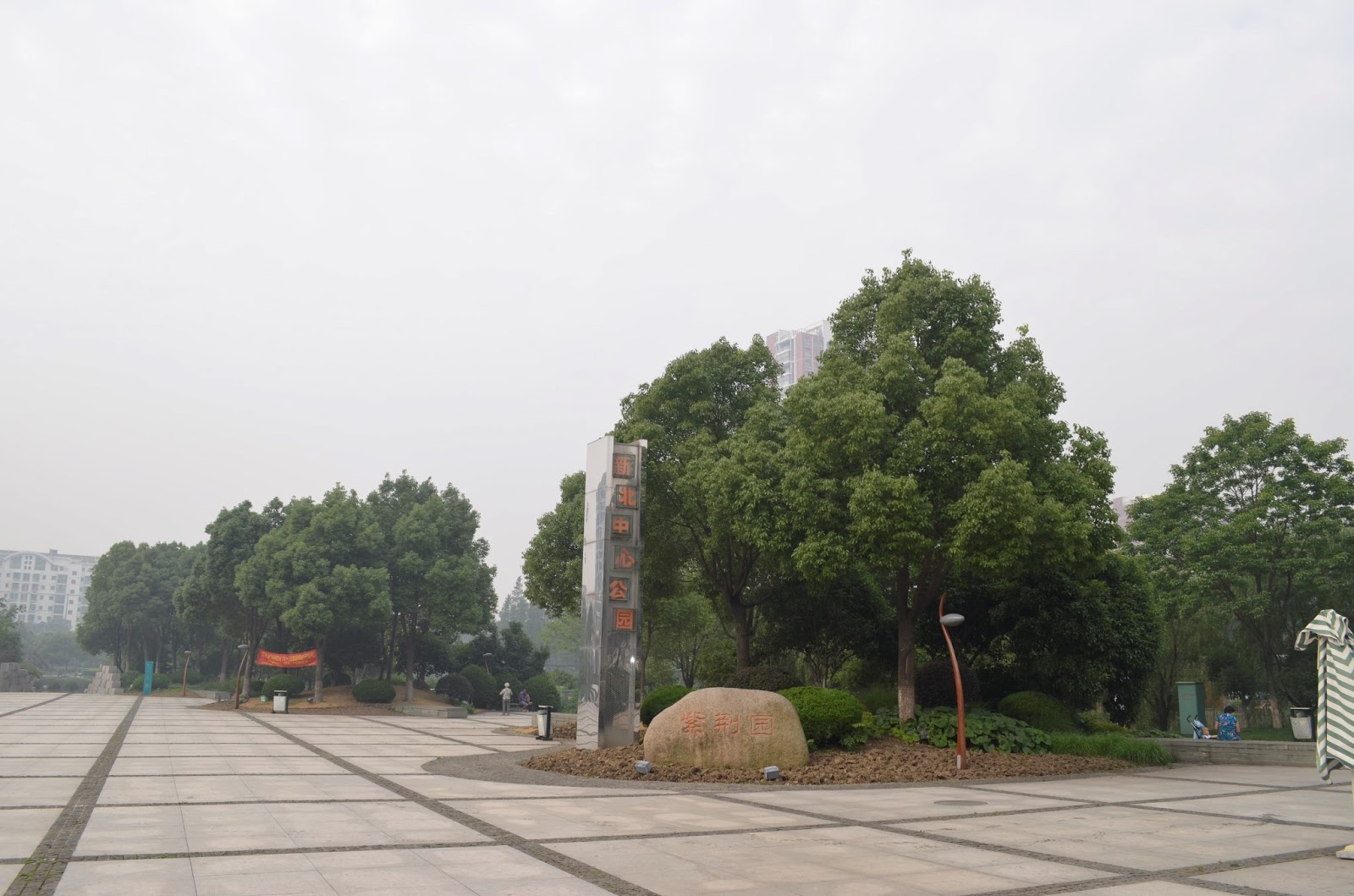 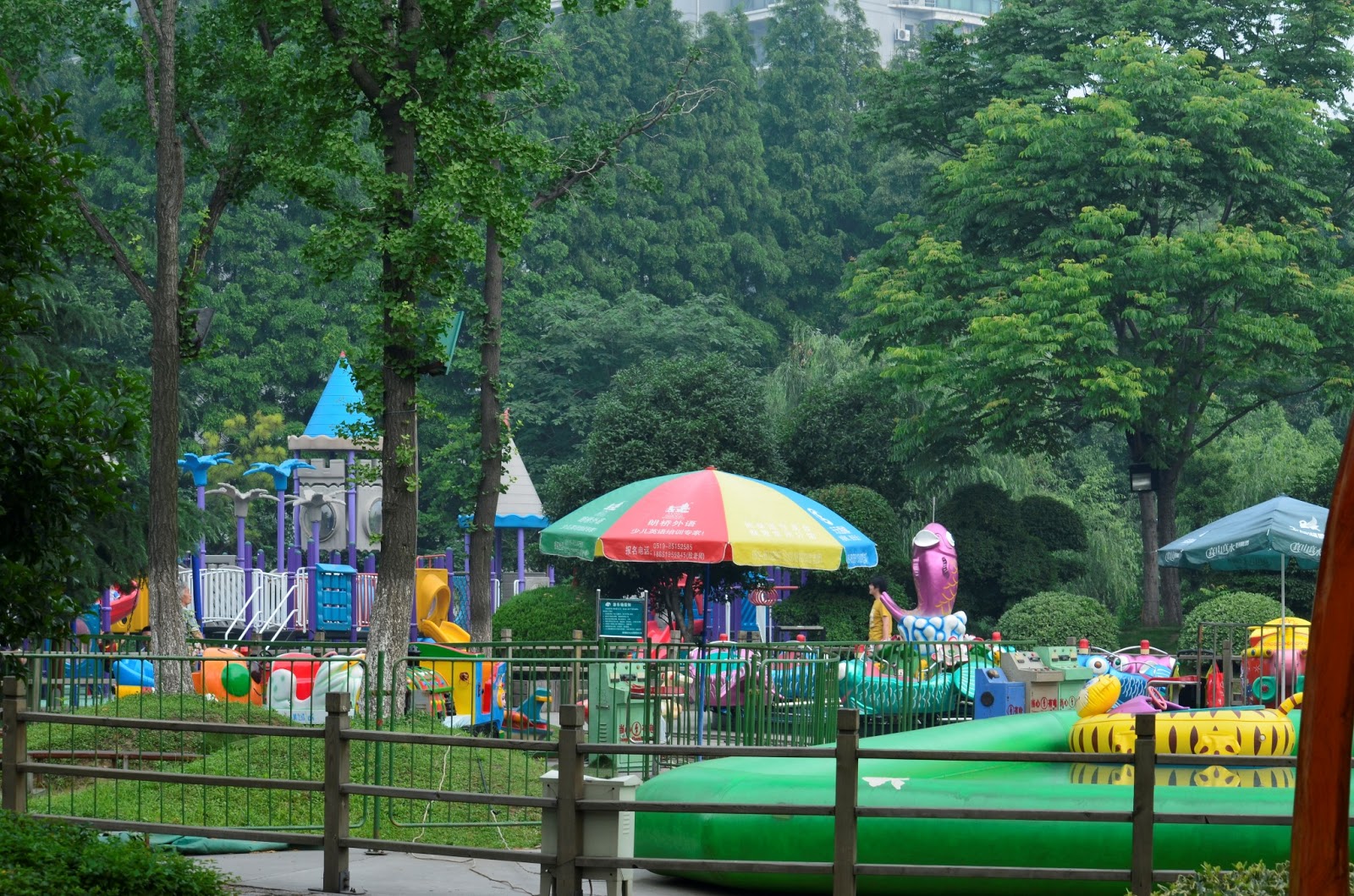 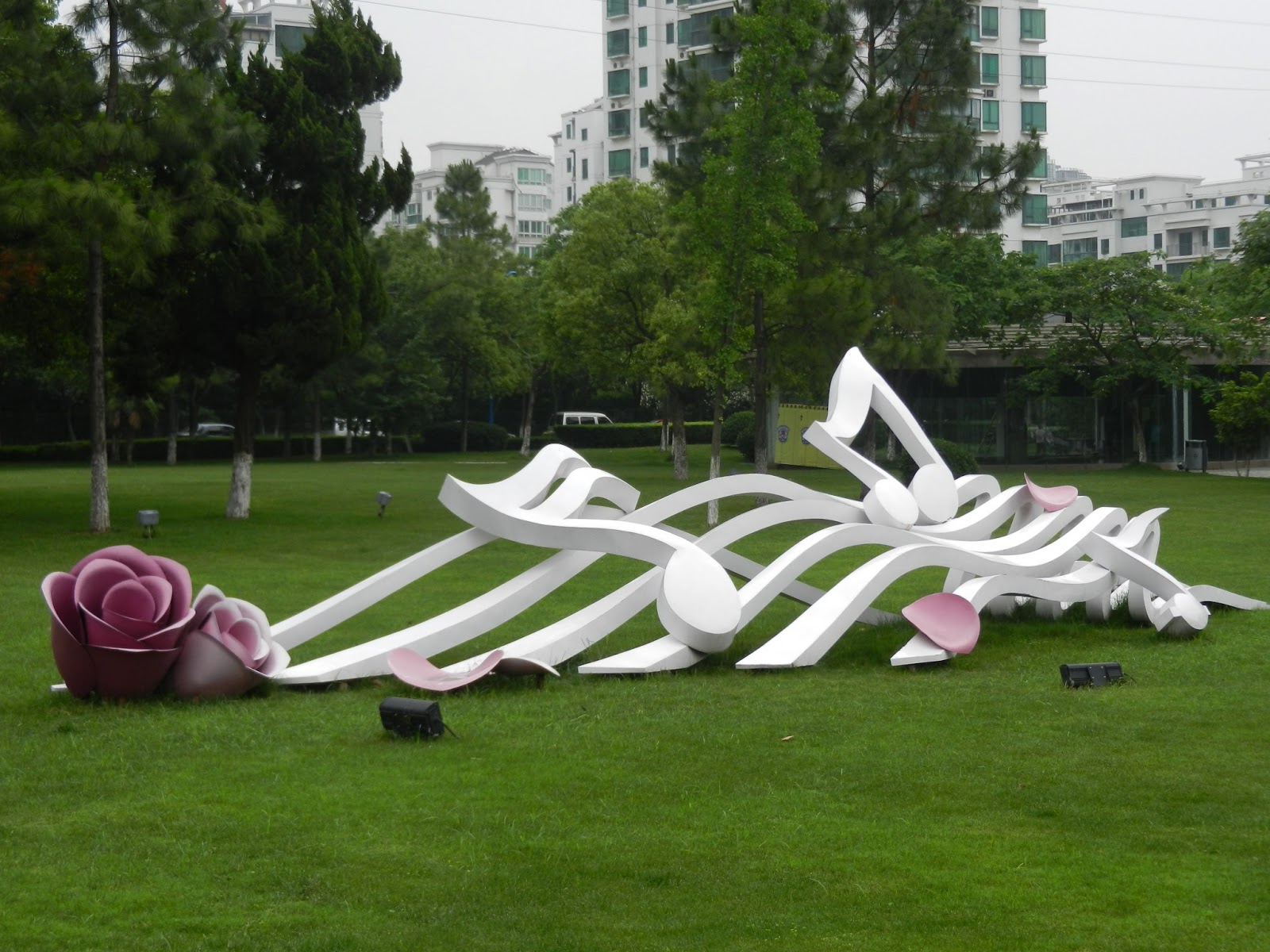 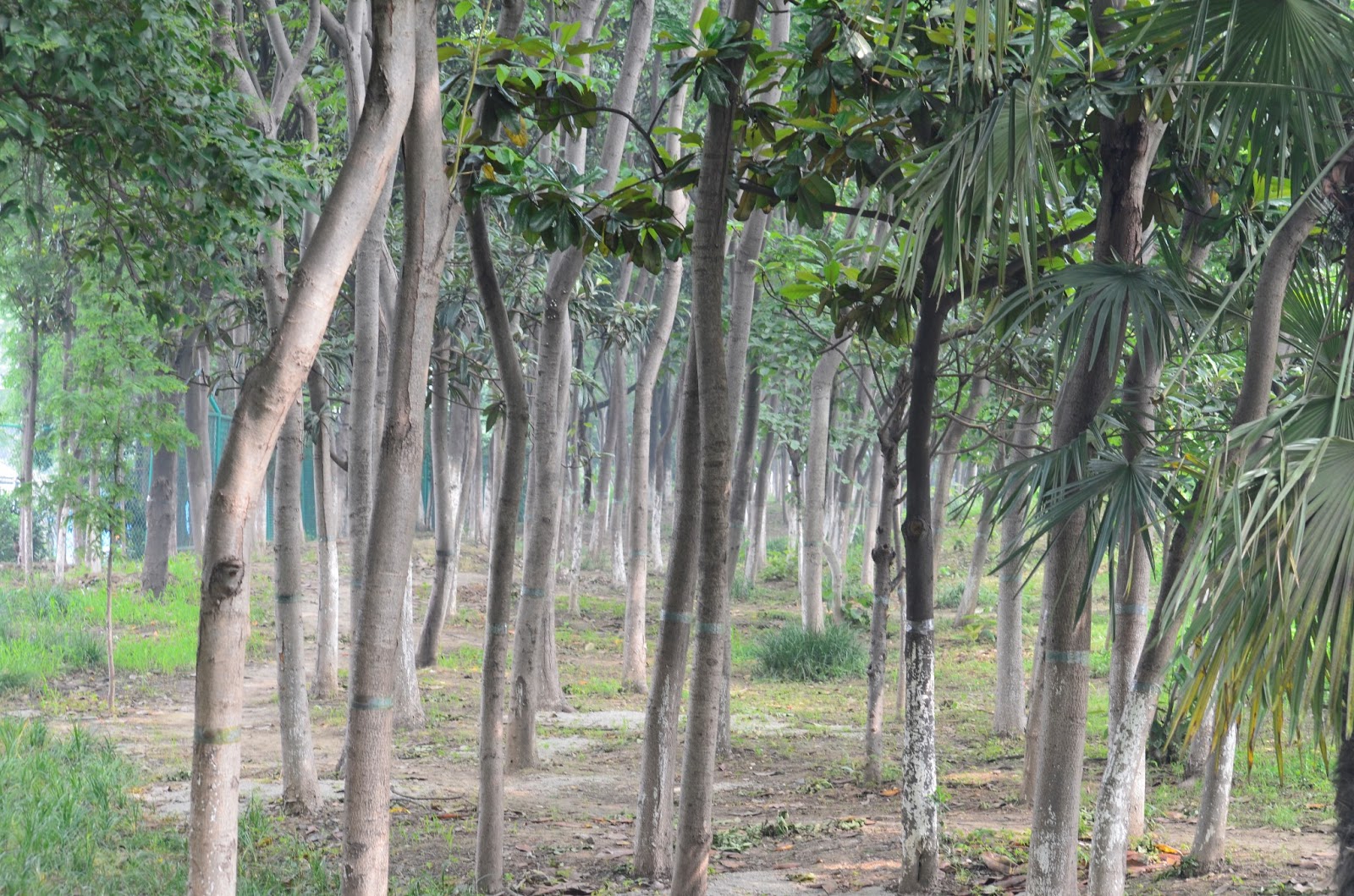 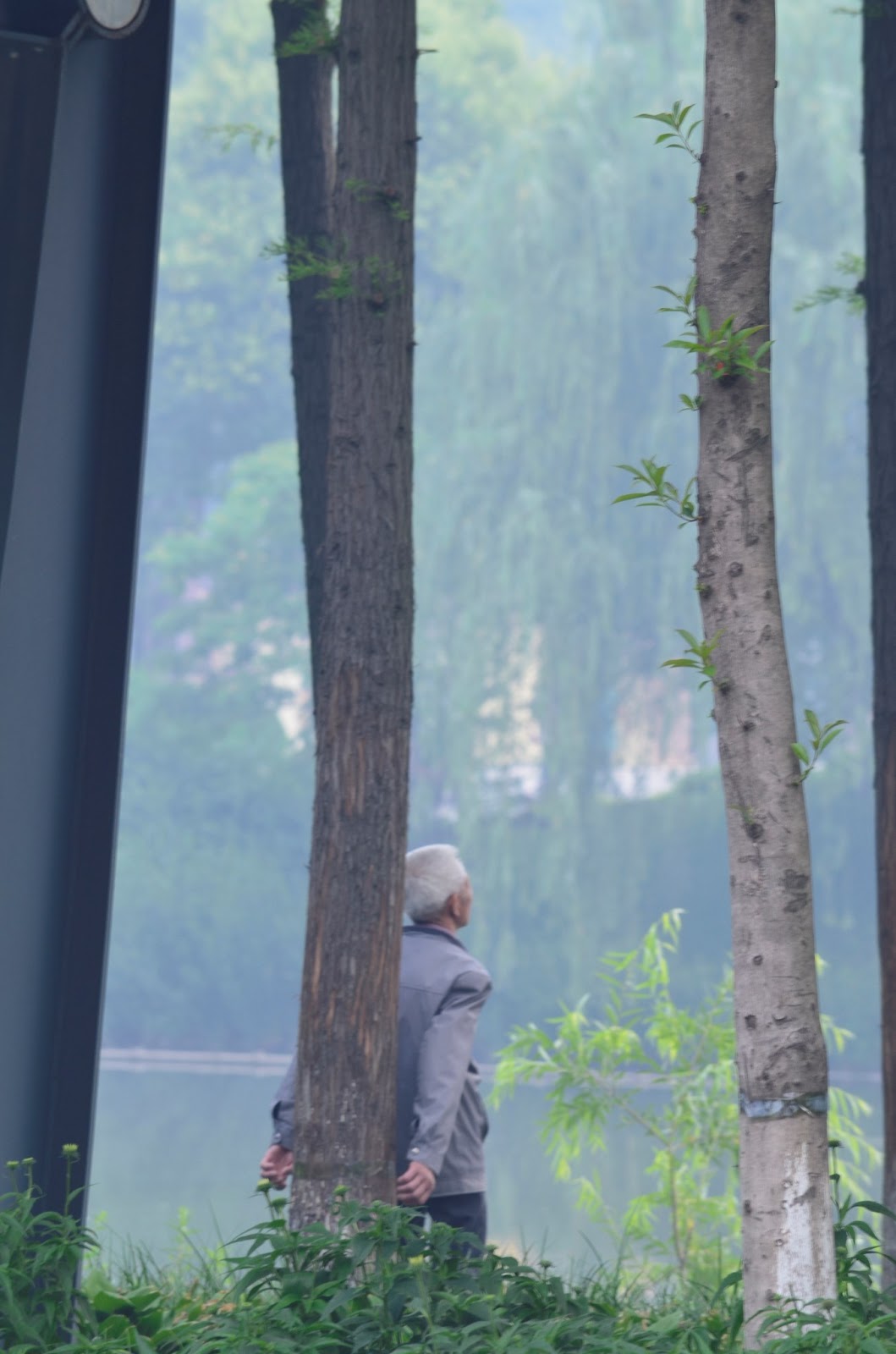 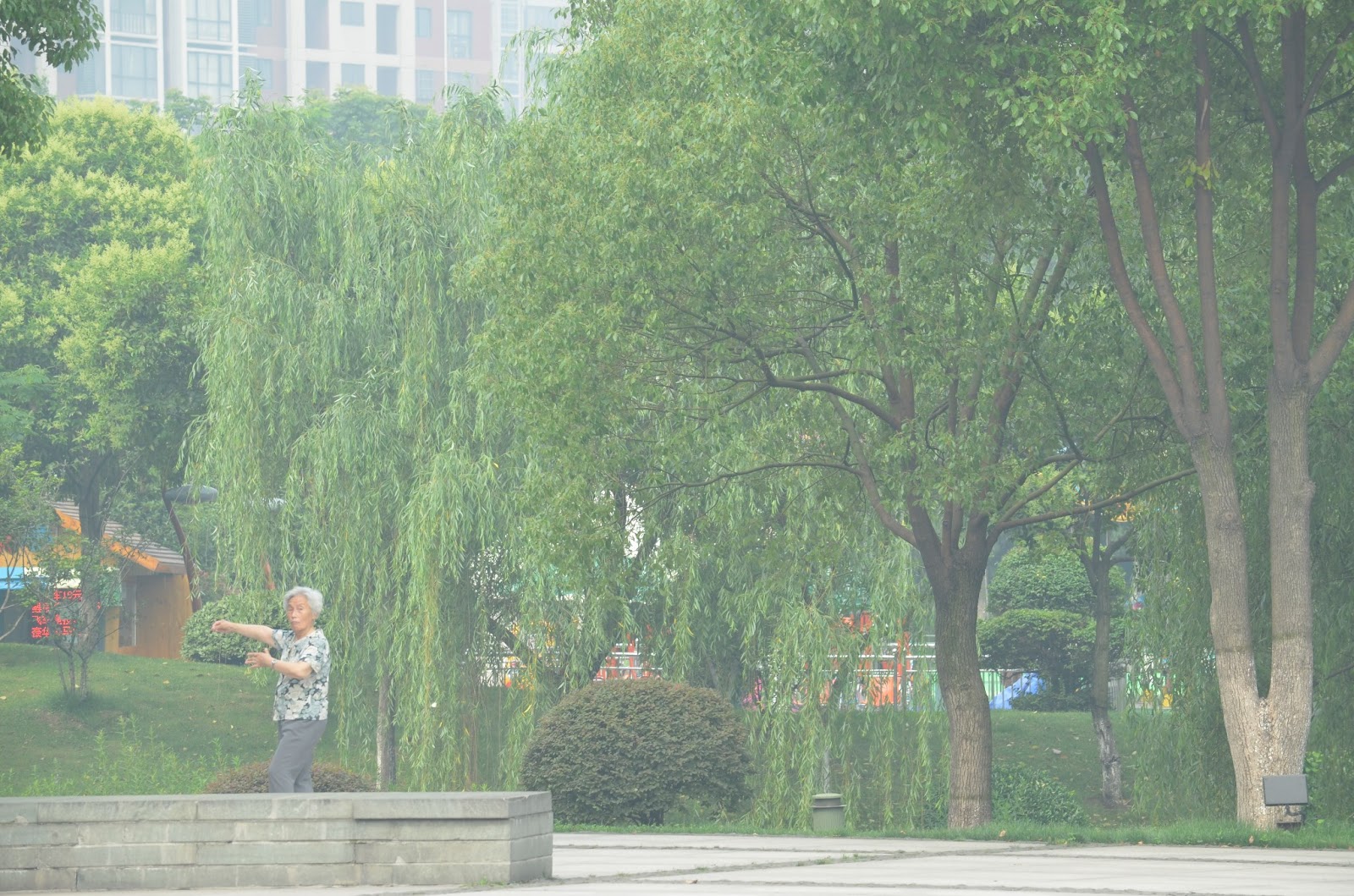 It was very hot, even at 8 am in the morning, primarily because of the 100% humidity.  So while the park was glorious, I was just as excited about the Starbucks right next to the park.  The building that Starbucks was in was beautiful, and I could order in English - yipee.  I happily ordered myself a venti iced latte.  It wasn't until I ordered another iced drink the next day that I remembered I wasn't supposed to have ice.  Whoops.  Luckily I did not have any trouble. 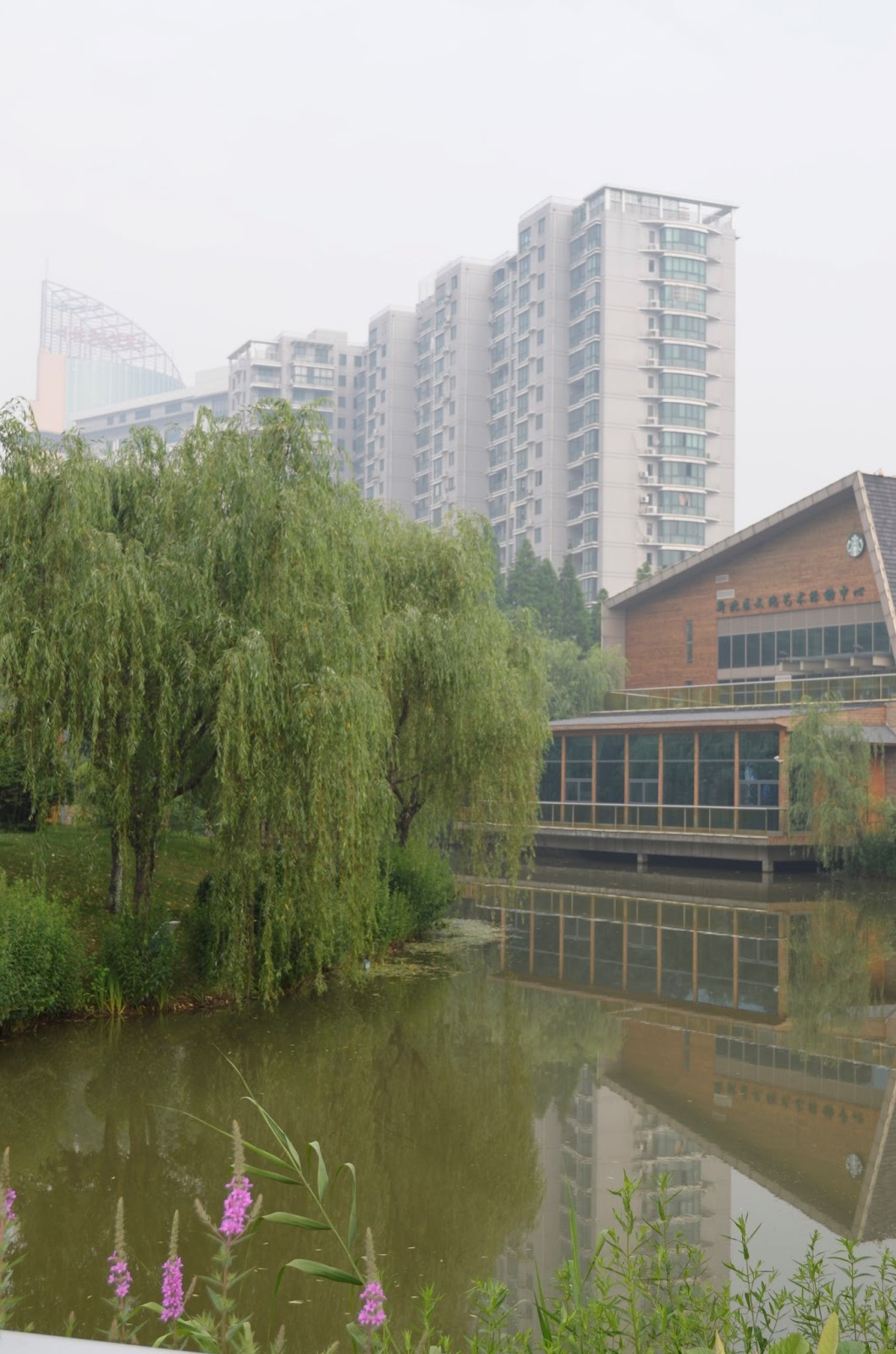 (The Starbucks is the brown building.  The tallest building way in the back, you can barely make it out, but it says 'Traders' in red at the top, that was our hotel.)