So on my last day 'alone' in China I was bored enough of walking to the same park and starbucks area that I braved a cab on my own.  I had a nice map that had the places I wanted to go in both English and Chinese characters, and the concierge assured me I would be fine.

Visiting a shopping area maybe wasn't highest on my list of desired places to go, but there was not a lot of tourist type activities that were within an hour drive of the hotel, and I really did not want to take a cab 90 miles away and risk not being able to get back. 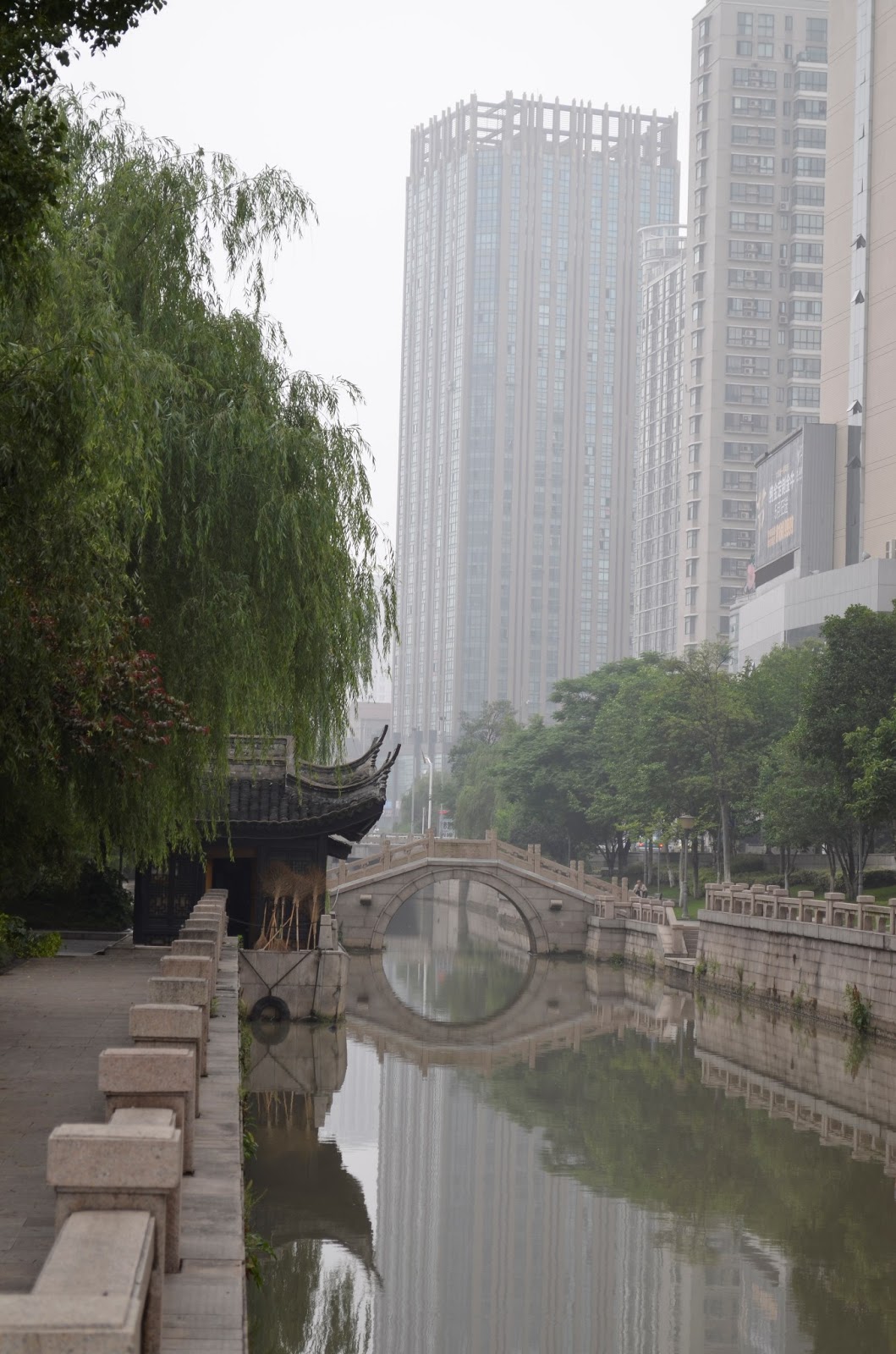 So I headed to the downtown shopping center.  In the back of my mind I kept hoping for some sort of rustic market, where small vendors sold food, baskets, jewelry, whatever.   But this shopping mall, almost three or four malls really, was as modern as any U.S. mall.  But for adventure I wandered a bit outside of the shopping areas and found two excellent parks. 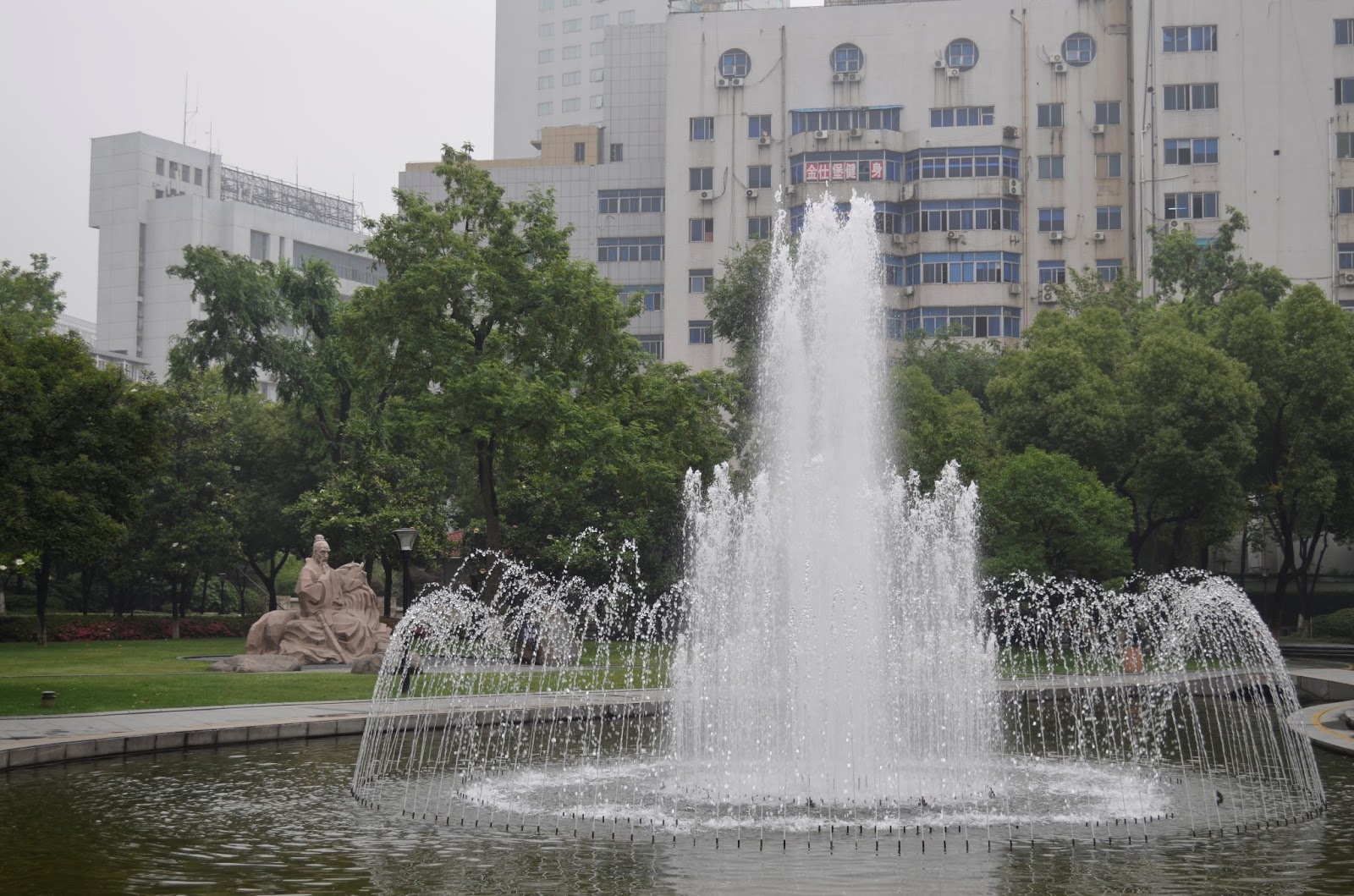 The entrance to the shopping mall, and an interesting food stand.
﻿ 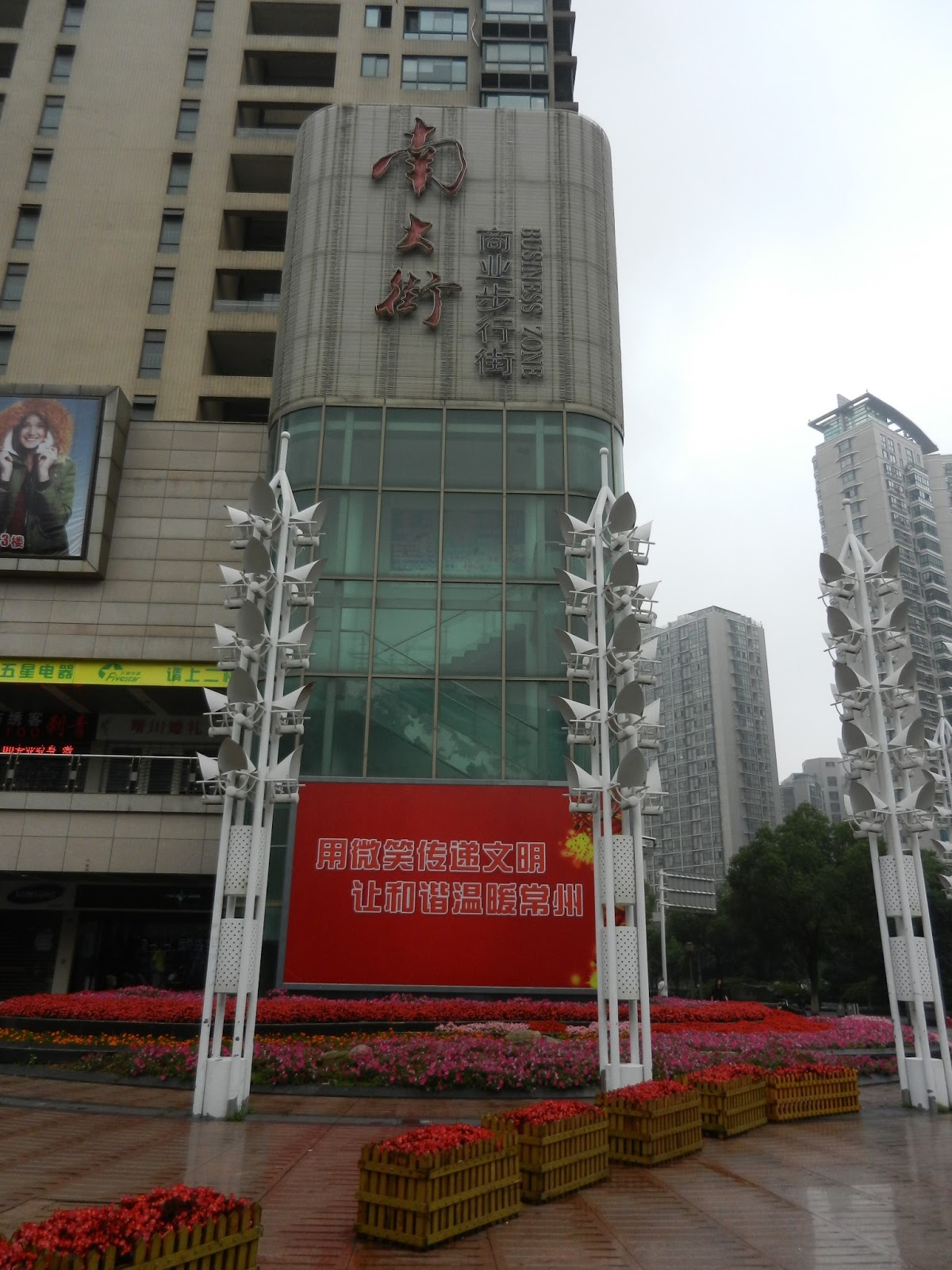 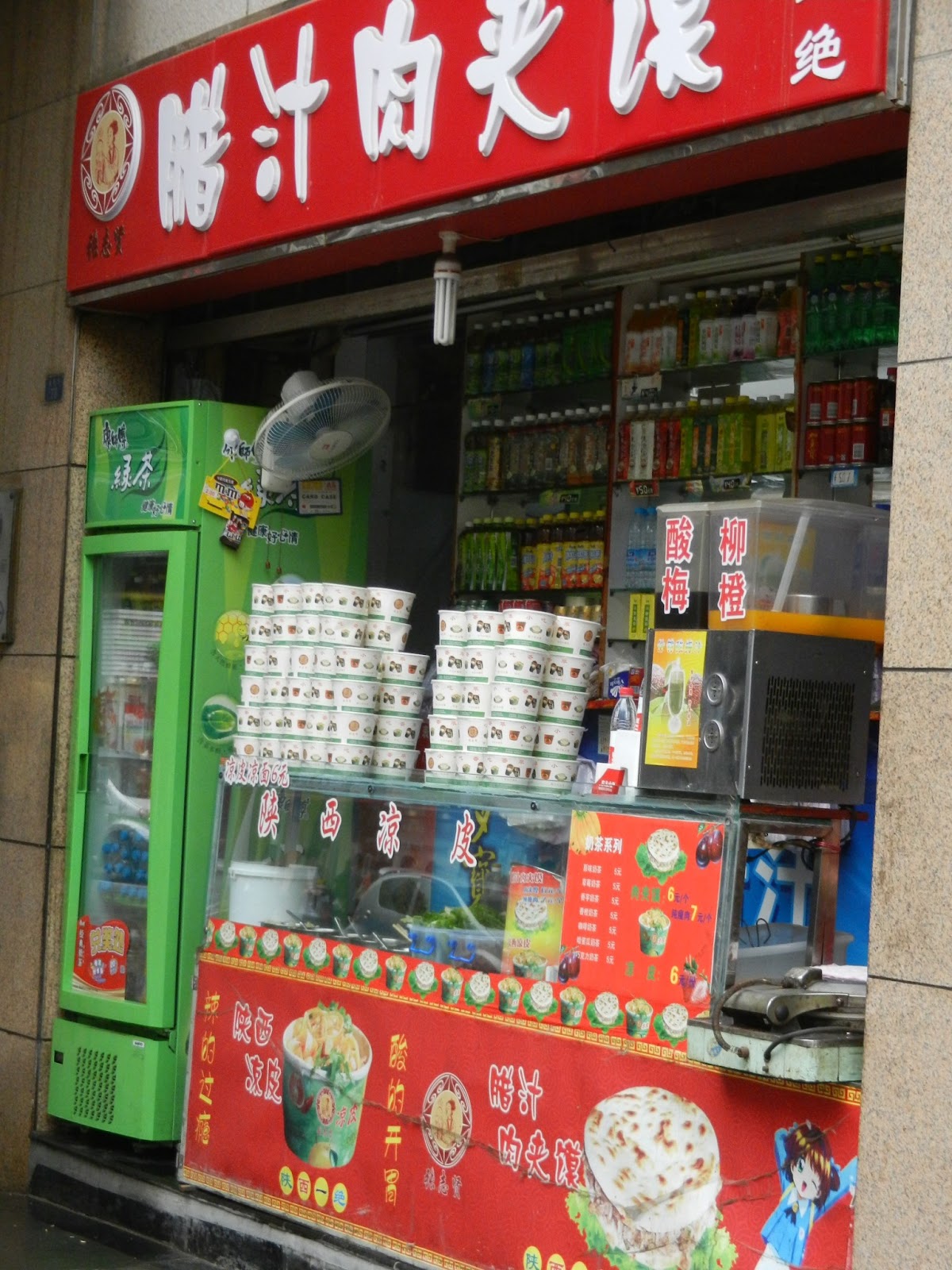 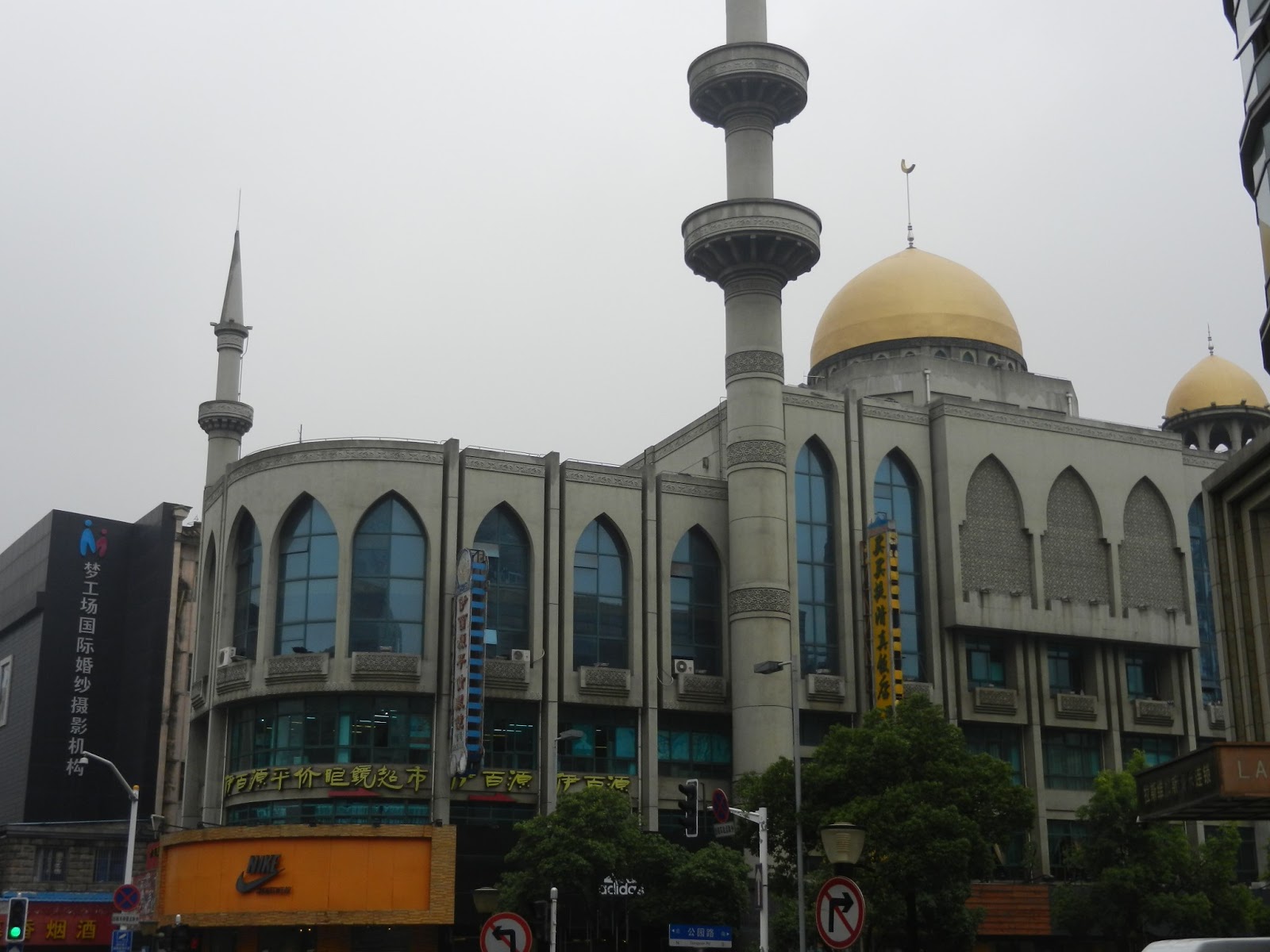 I liked the shape of the building above, then the Nike store - nice!  And the Chinese also care about your safety on stairs. 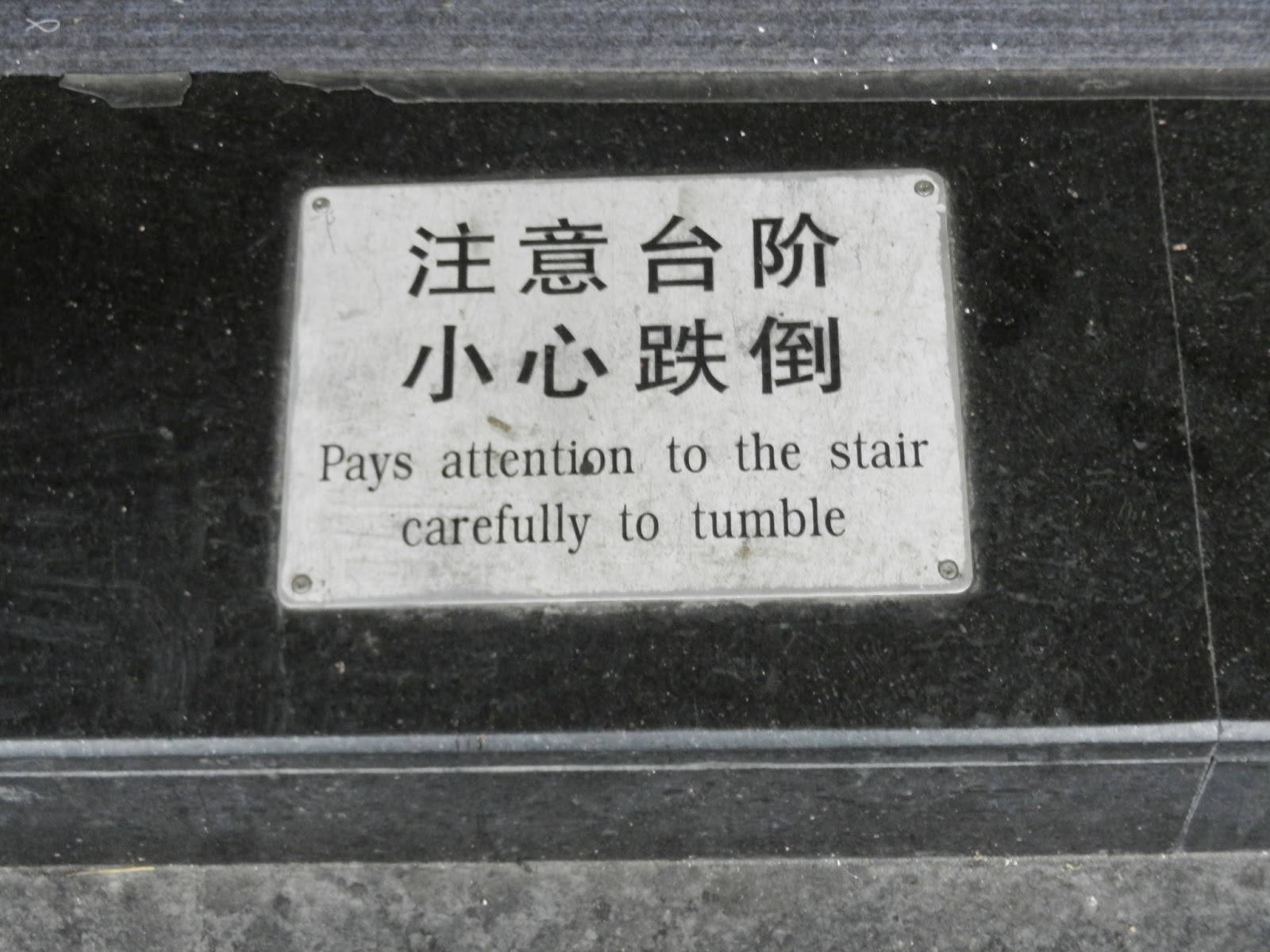 I'm not completely sure I understood the message of this picture, but I'm not terribly good with icons or the abstract.  Interesting though.  This was just hanging on one of the glass walls outside a clothing store.﻿
﻿ 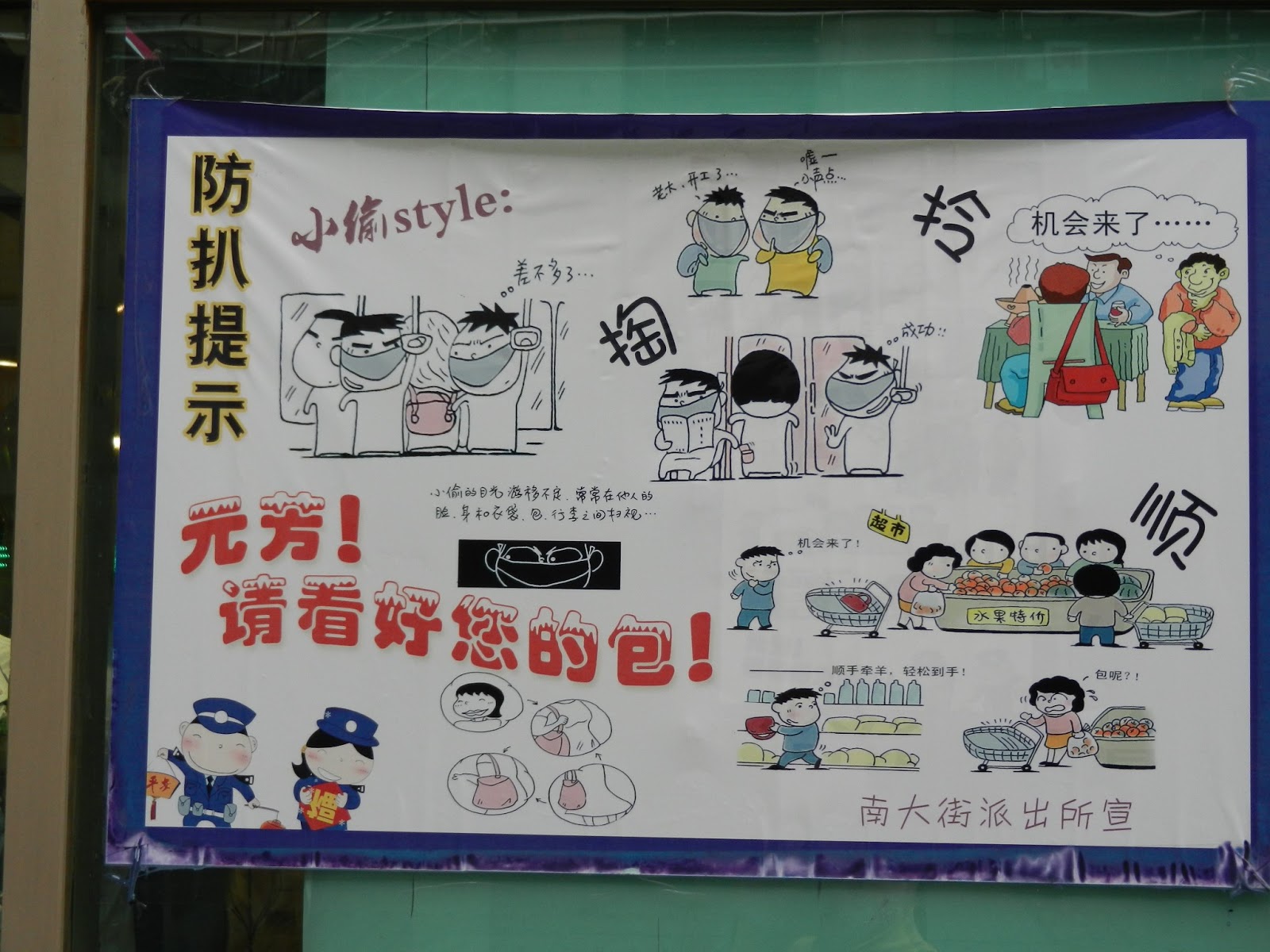 I found one bookstore and wandered around for about a half hour.  I found some photography that I could understand since - yeah - all pictures. 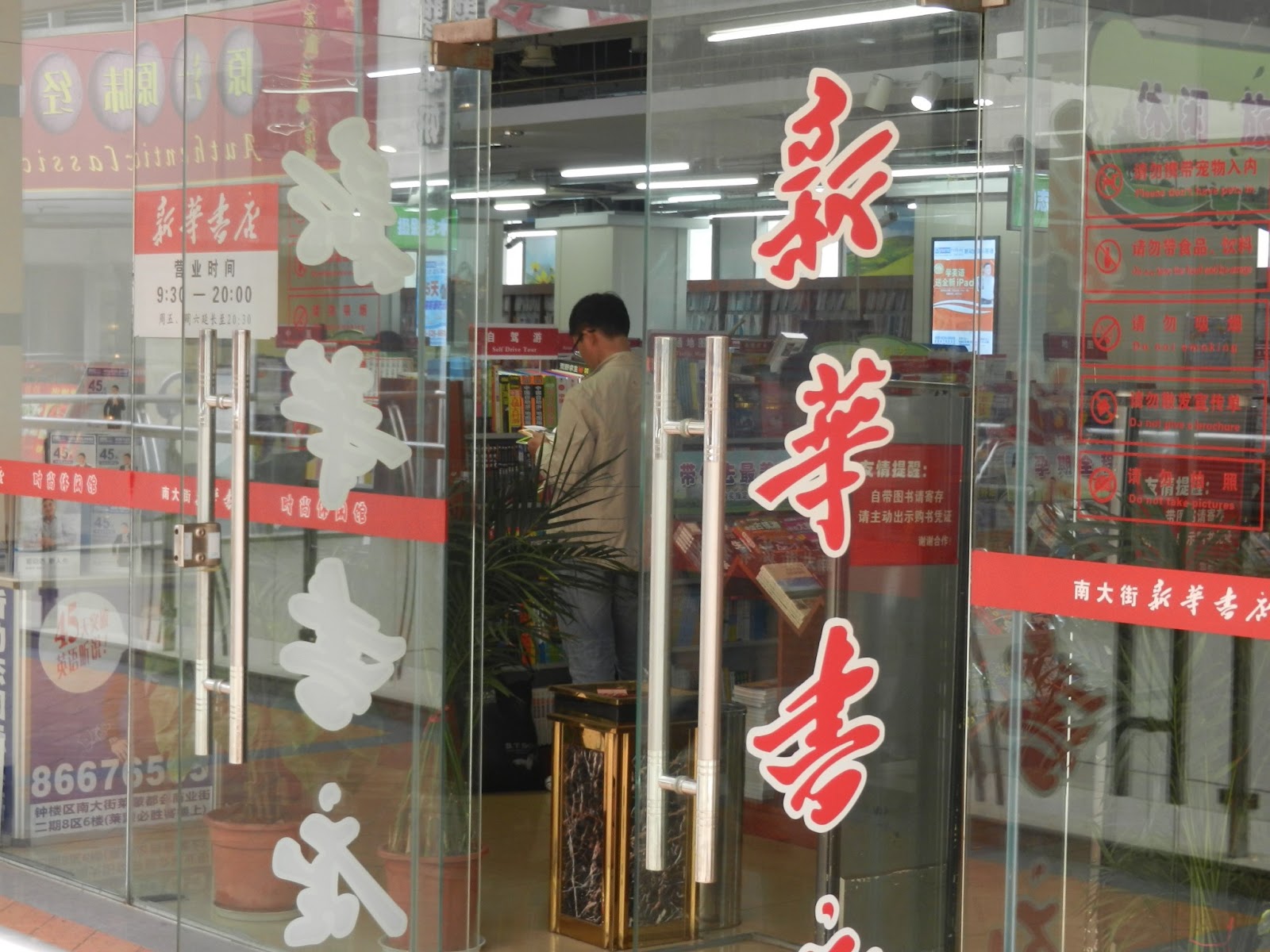 I liked the neat art-work that part of this clothing store's display.  Look close at how the people made of string were created.  Neat. 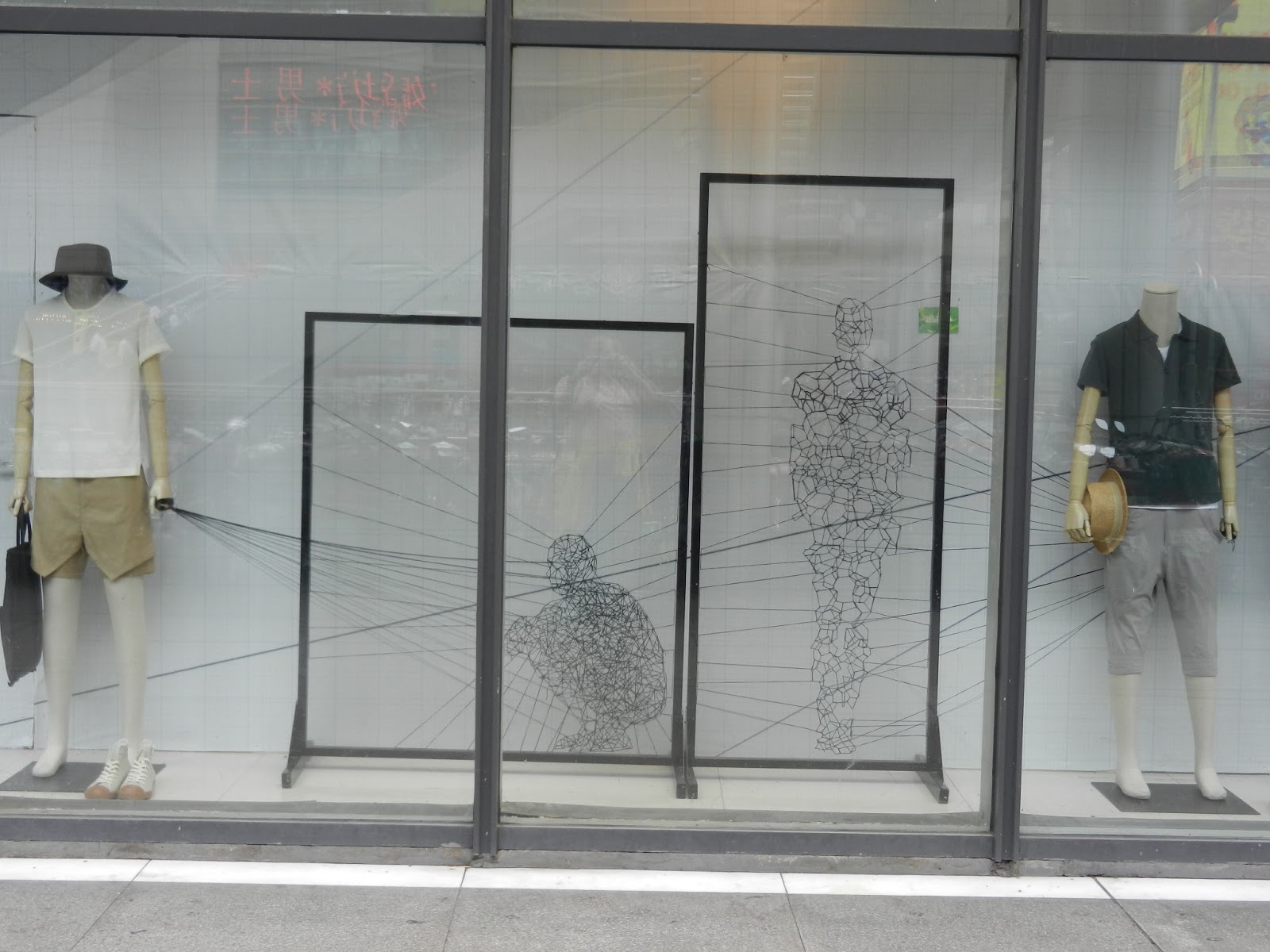 These metal characters were outside of a bar.  (It had a sign that said "Bar" so I'm guessing it means what I think it means, but it was closed so I couldn't go inside.) 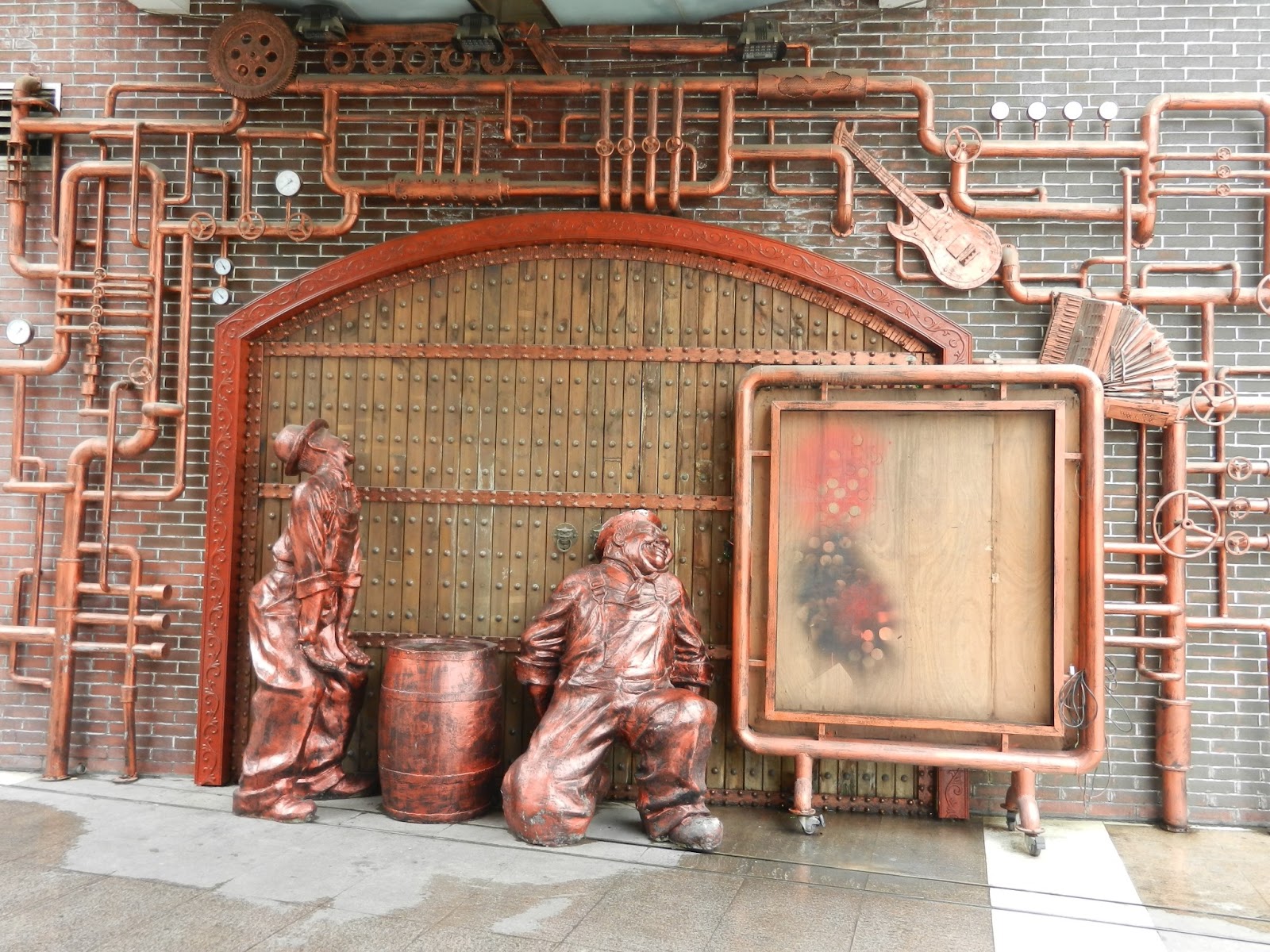 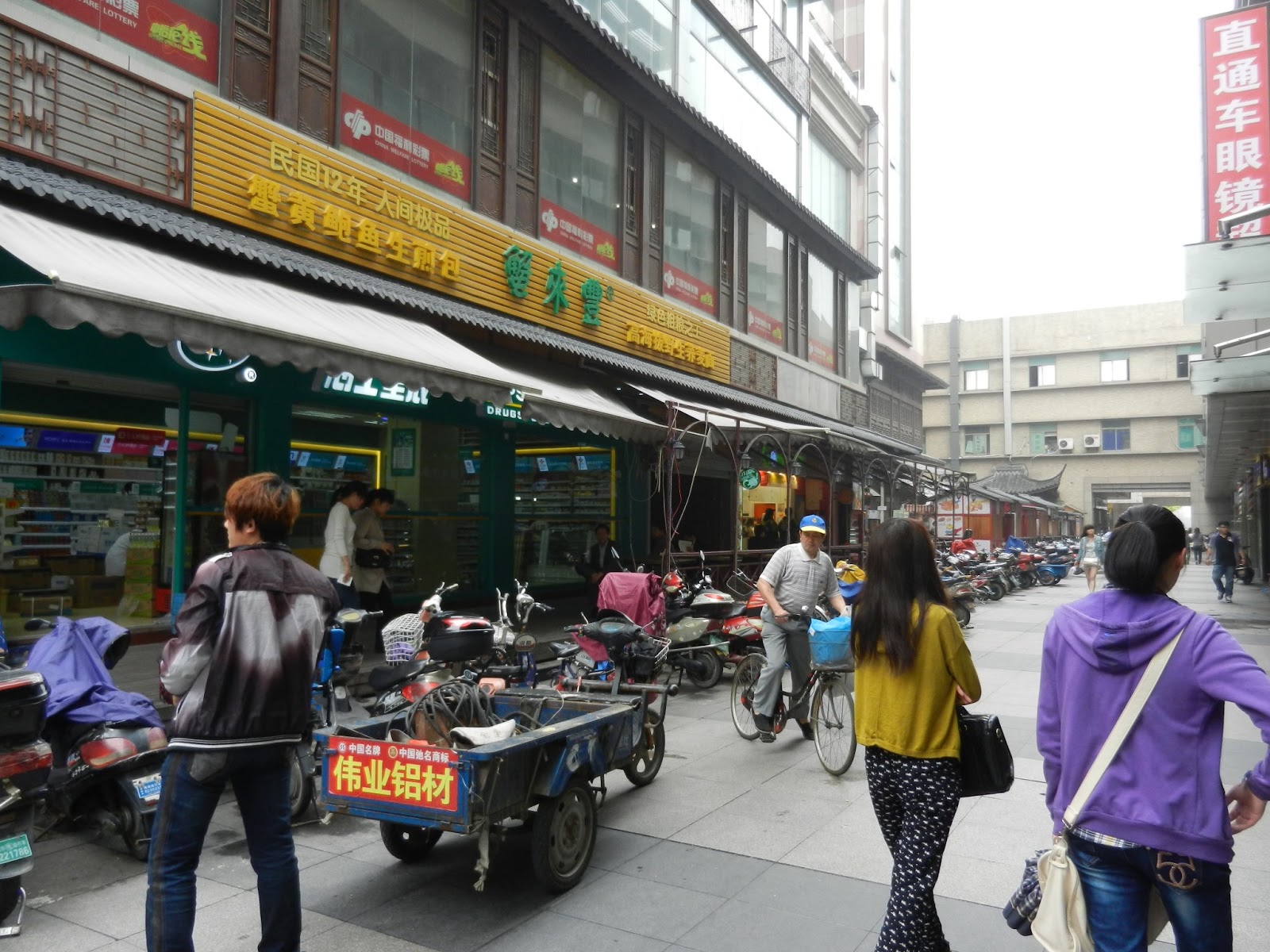 The most authentic looking area all day.  ﻿ 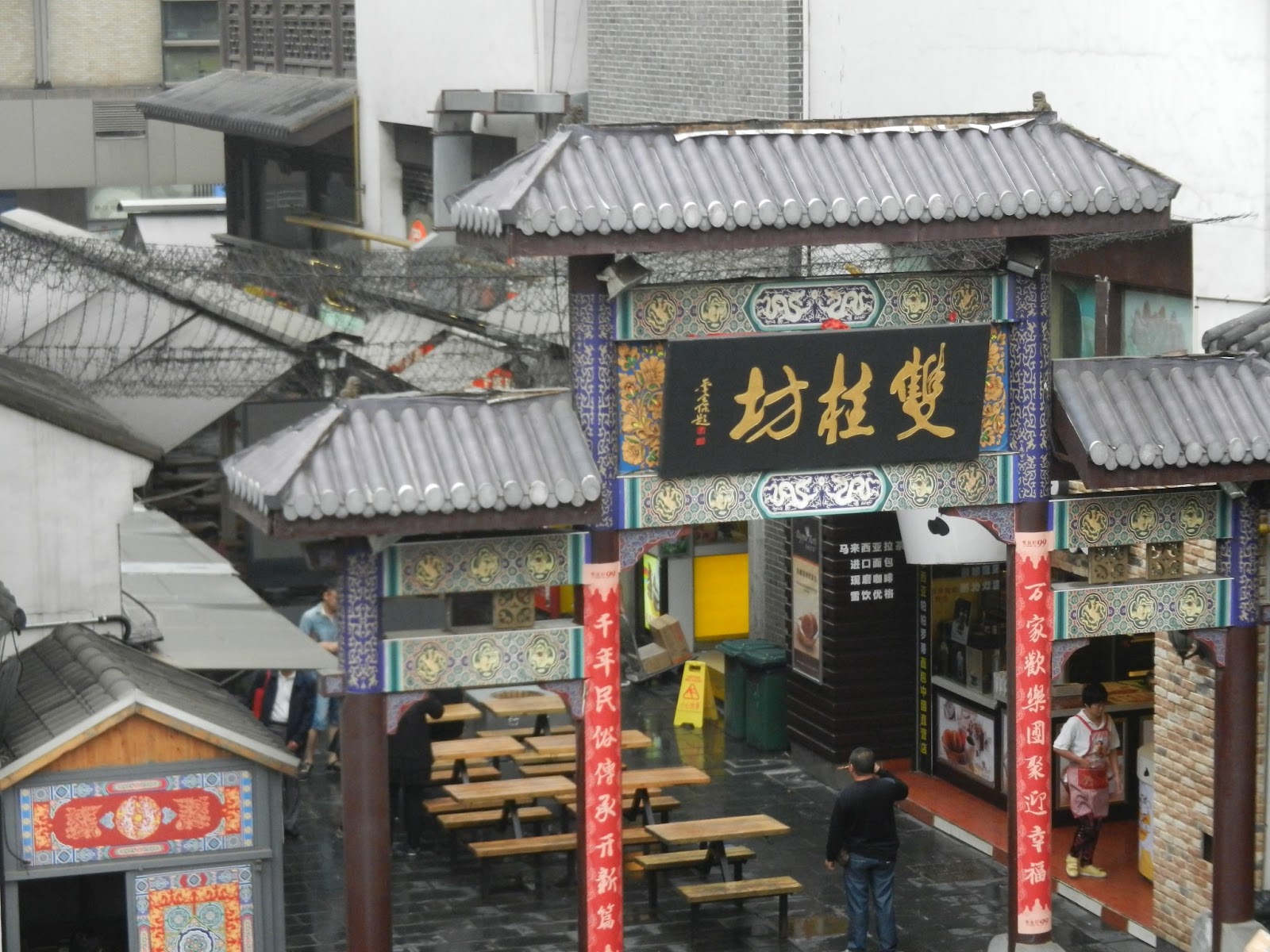 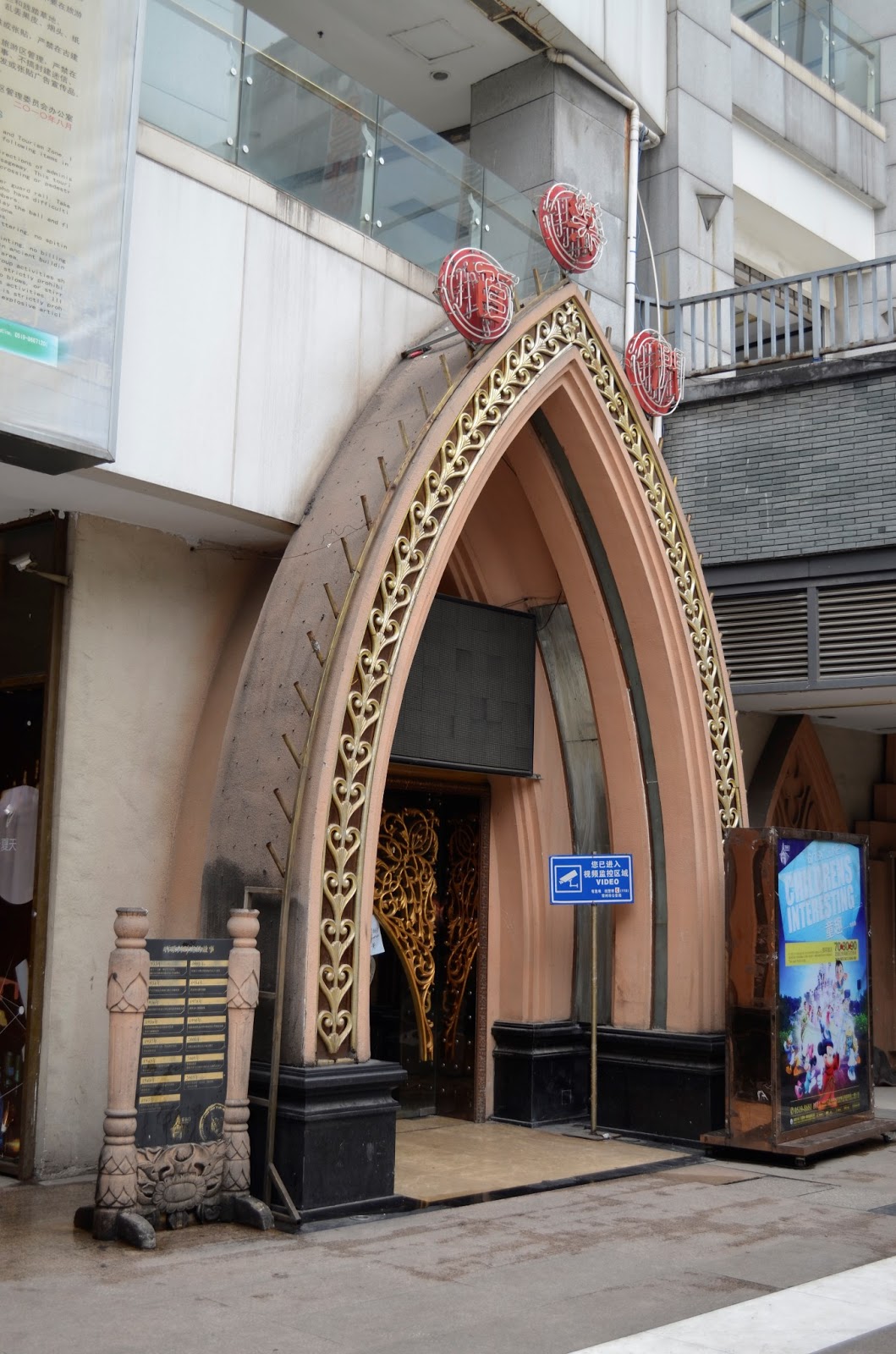 The shopping center area only took up a little over two hours of my day, so when I got back to the hotel I still have 4 hours until my husband would be finished working for the day.  We had talk about taking the train to Nanjing on Saturday, so I figured I would use the rest of my free time to see what a Chinese amusement part was like.  China Dinosaur Park here I come.
﻿ 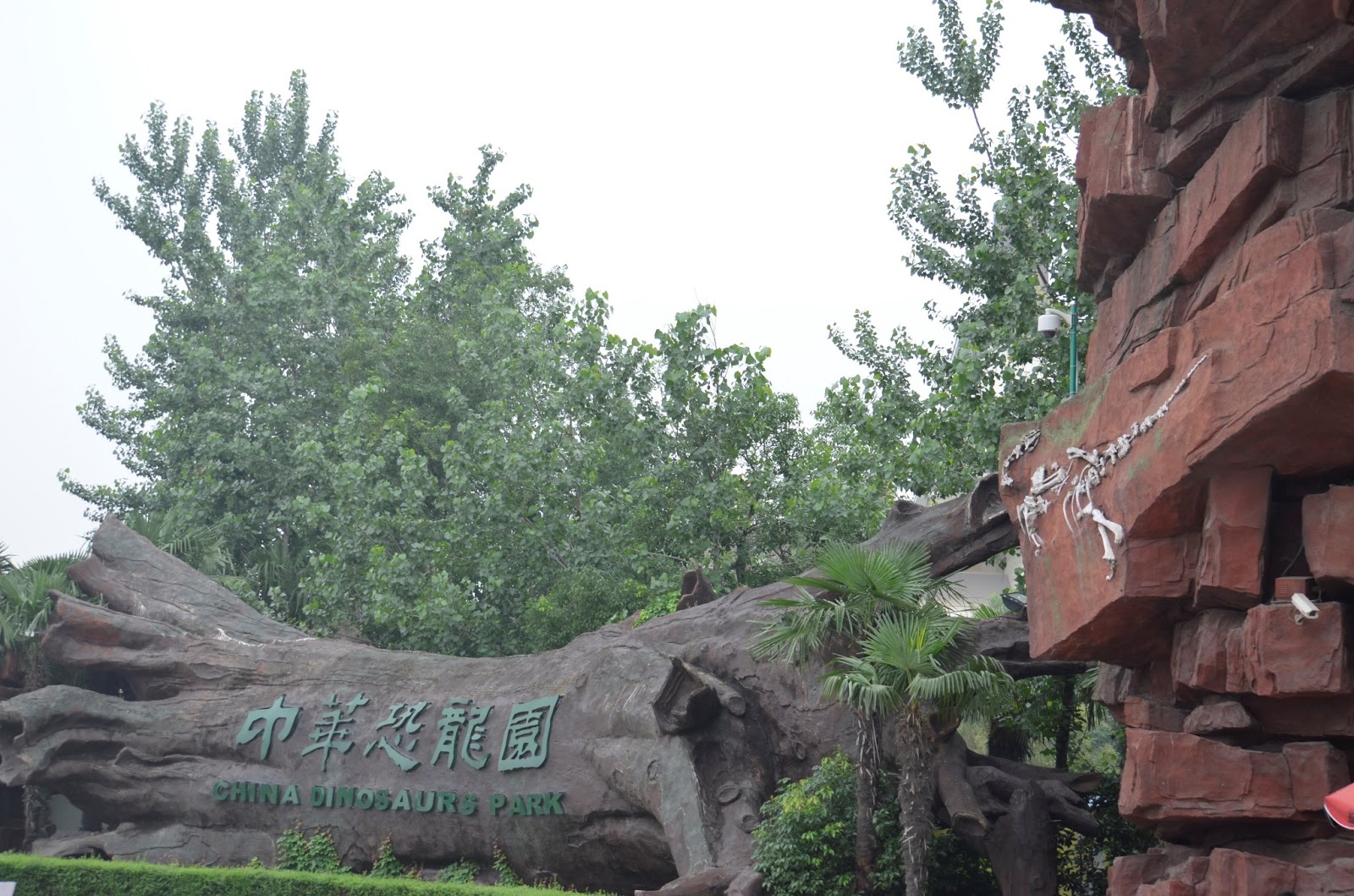 Getting into the park took me a while.  There were lots of people just standing around outside of the ticket booth when I arrived so I wasn't sure what was going on.  None of the price signs were in English, and it kind of looks like maybe ticket prices varied by what time of day you entered - and there was something about 3:30 so I thought maybe cheap tickets started later and people were just waiting.

Eventually I realized it was only 2 pm, so yeah, that wasn't right.  And then after about 10 minutes of thinking and watching I saw a sign that said - in English - that the outside attractions were closed for a little while because of the weather.  Huh?  It was... humid.  It was not raining, it was lightening, it was not stormy, and it was not that hot.  It was humid.  I foudn that baffling.  Also, isn't like the whole park outside?  What exactly is open?  Finally there was one lady who bought a ticket and I watched her go through the gates.  So I went to the ticket counter to buy a ticket too.  The lady tried to tell me that the park was closing at 5 pm, so that took me 5 minutes to figure out.  (I didn't care - I just wanted to see the scenery.)  And the scenery did not disappoint. 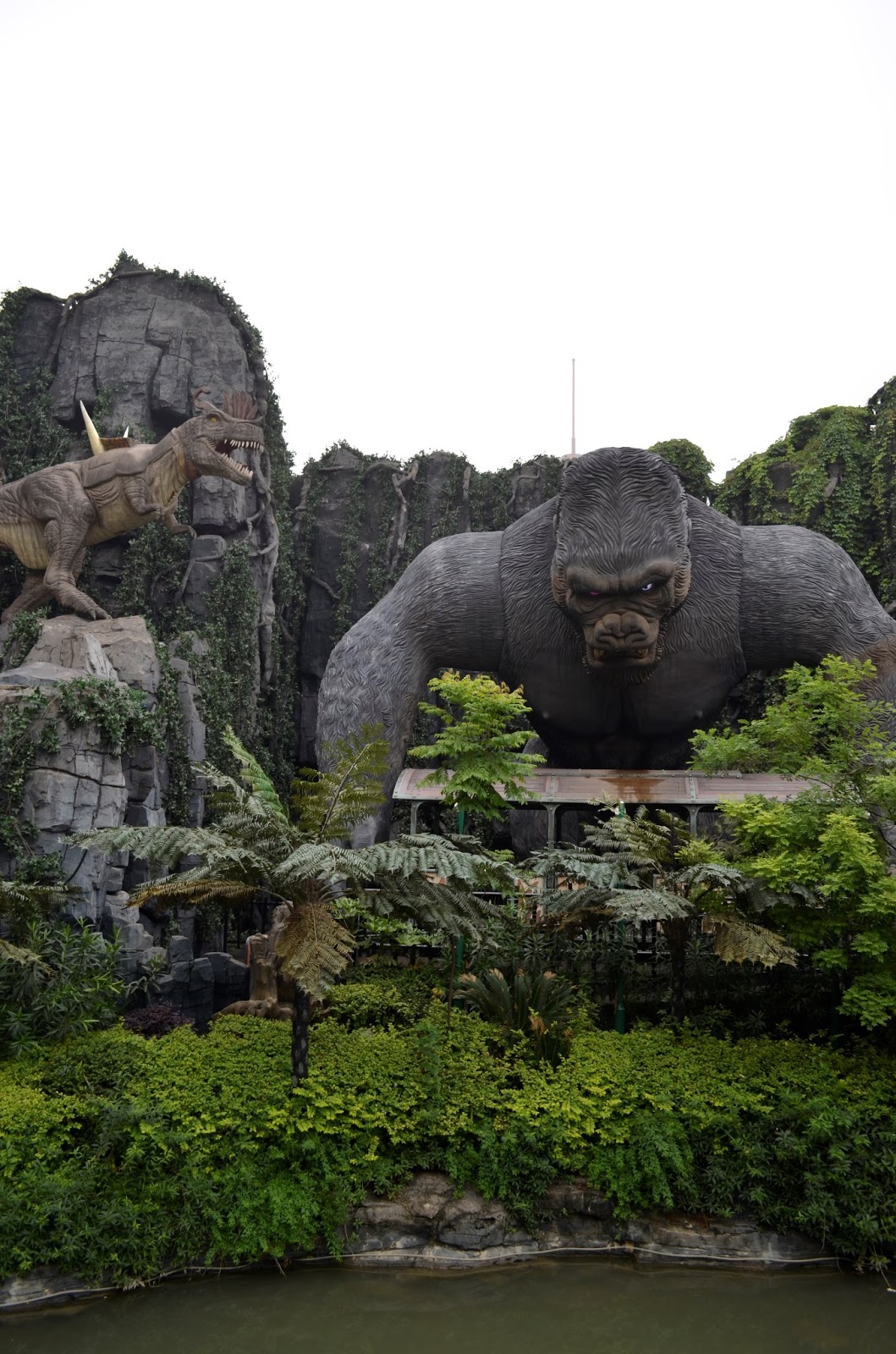 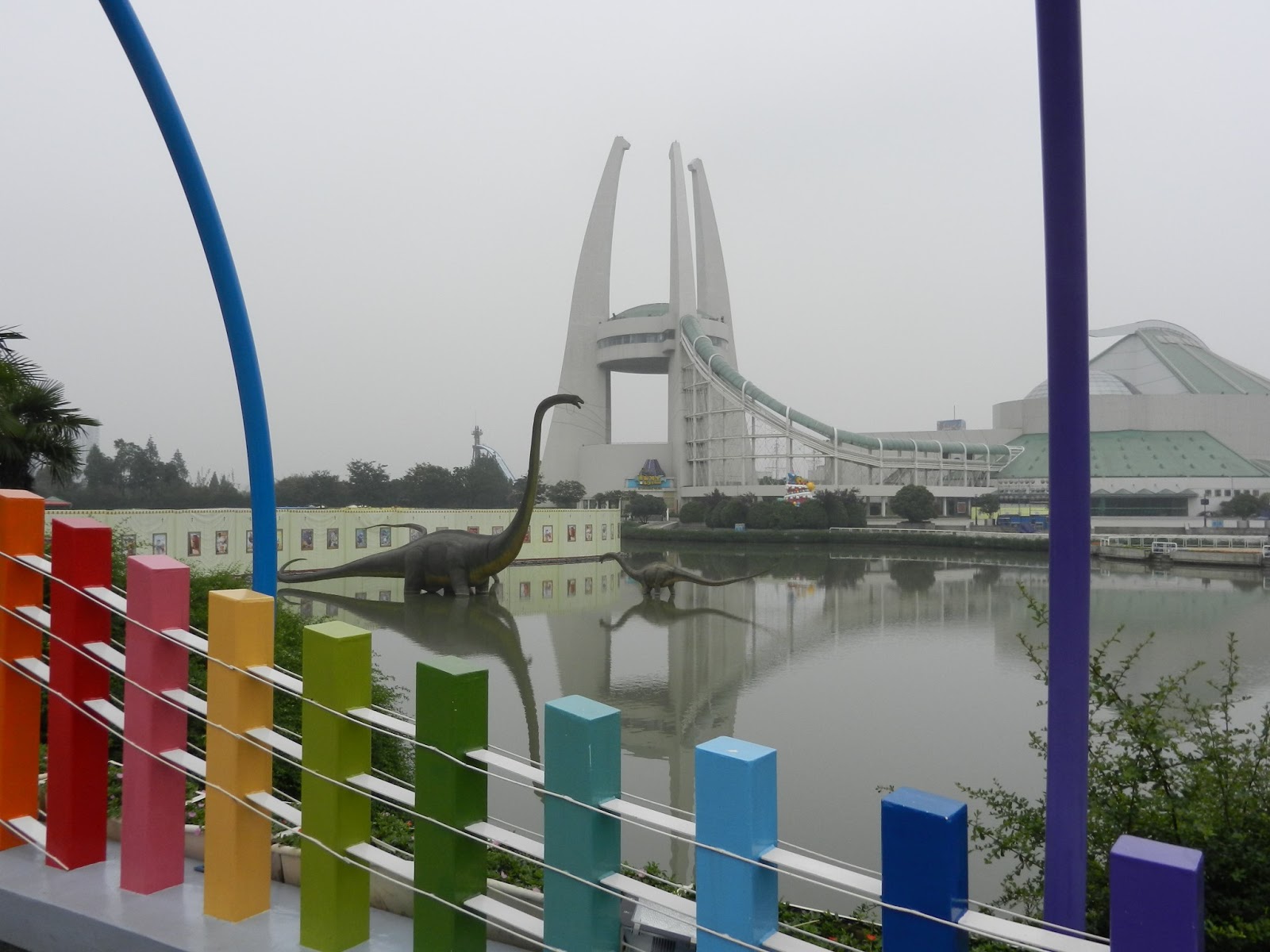 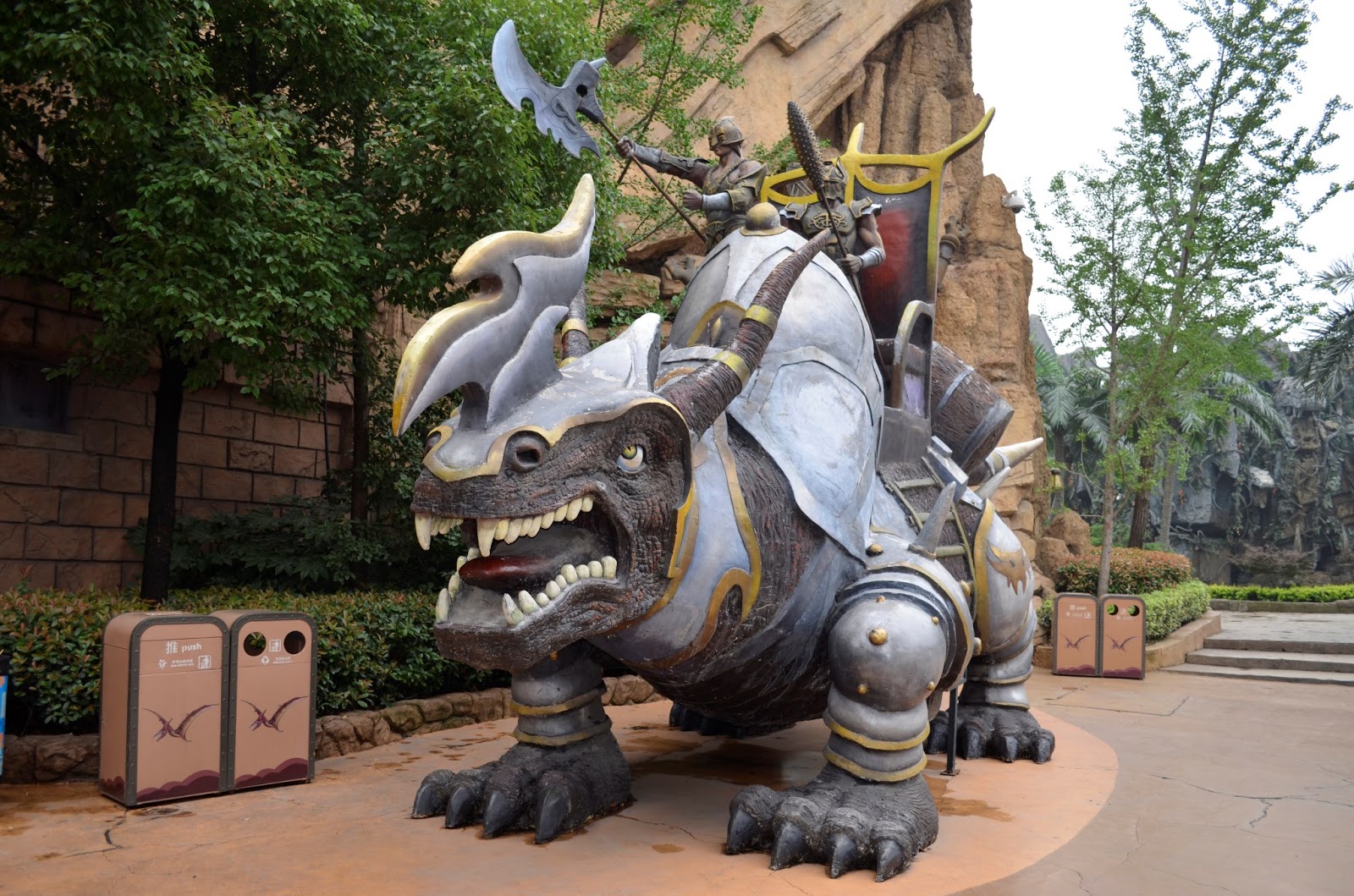 I watched two live shows, a bird show and a walrus show.  Pretty much like English shows.  The parrot drove a bicycle on a wire, an emu ran out on stage, the walruses played with a ball and did flips.  The rollercoaster ran twice in the two hours I was at the park.  I saw the log ride go once.  I did not see any other rides with riders.

The trip back to the hotel continued the excitement since when I tried to get a cab four men rushed me - I assume telling me I could not have the cab.  (No English now.)  Okay, okay.  I won't take the cab.  I'm thinking maybe there was a line, but who knows.  Then a guy in a silver car tried to talk to me, I'm thinking he was telling me that he could drive me.  But his car was silver and the cabs are light green.  I read the travel books, only official cabs for me.

Luckily I had prepared for this possibility and the Dino Park was only a little more than a mile from the hotel, and it was straight down one road.  So I just walked back, getting to enjoy more of the Changzhou scenery, and I was treated to a few more cute dinos. 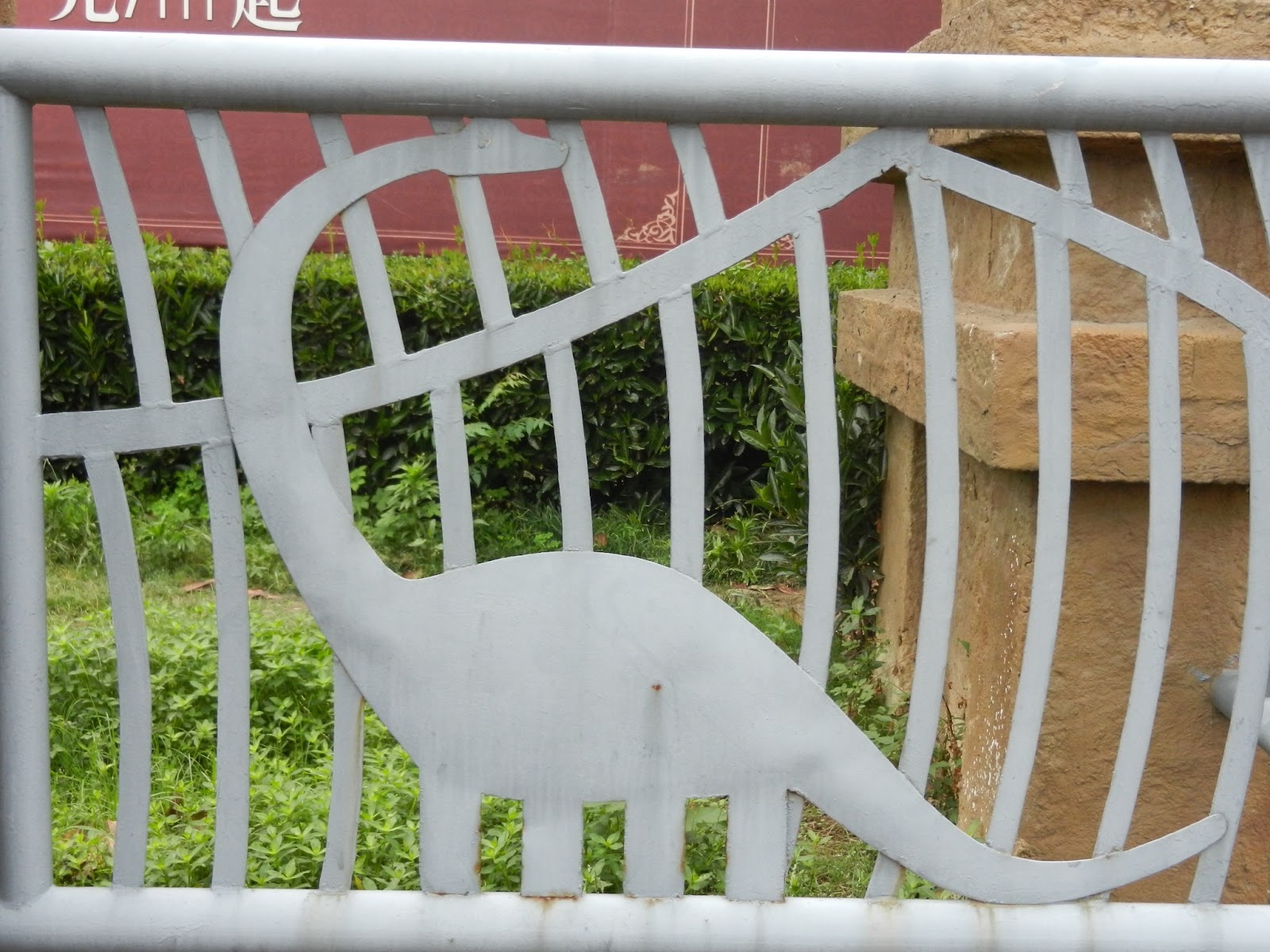 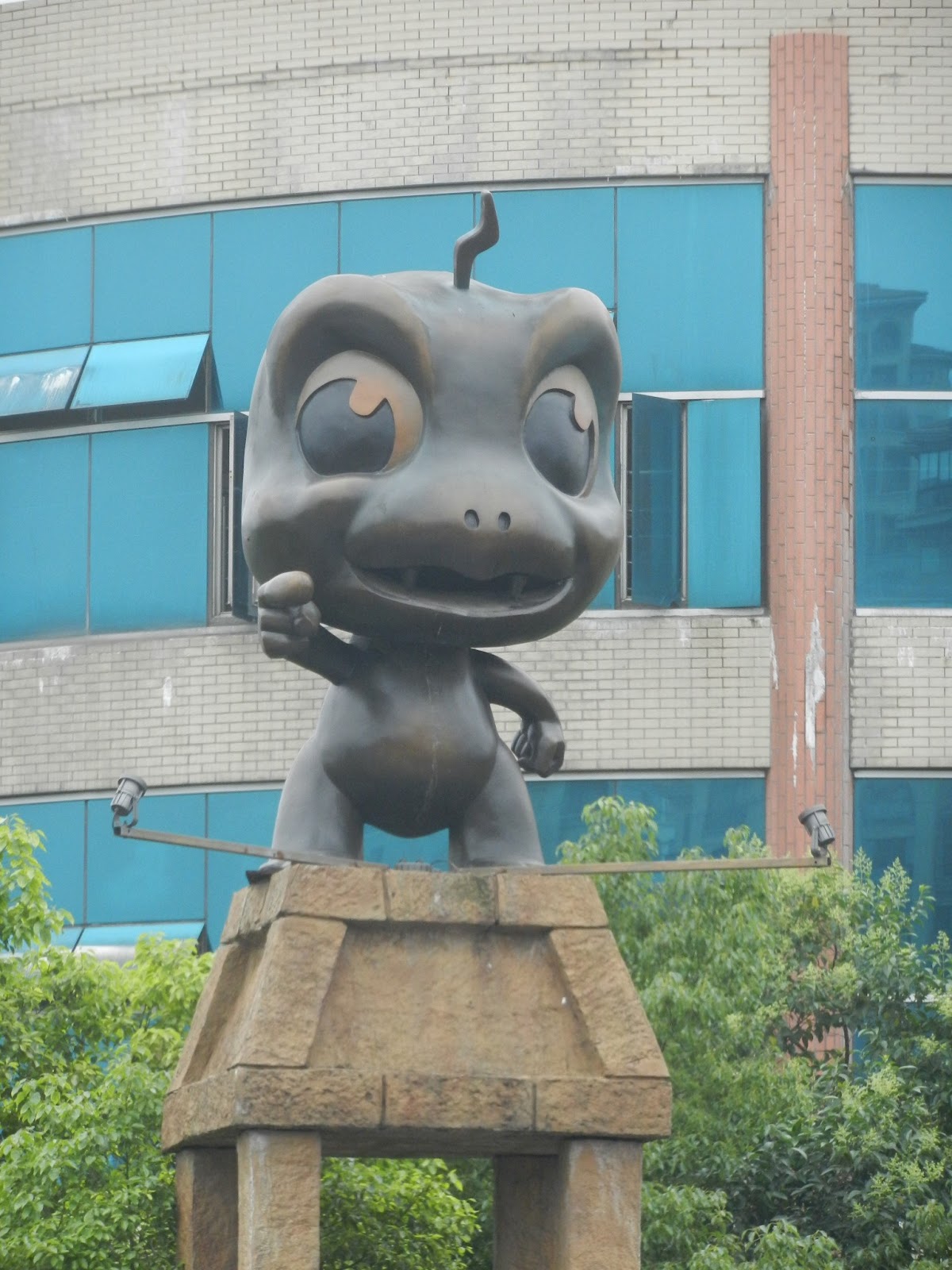 And soon my hotel was in sight. 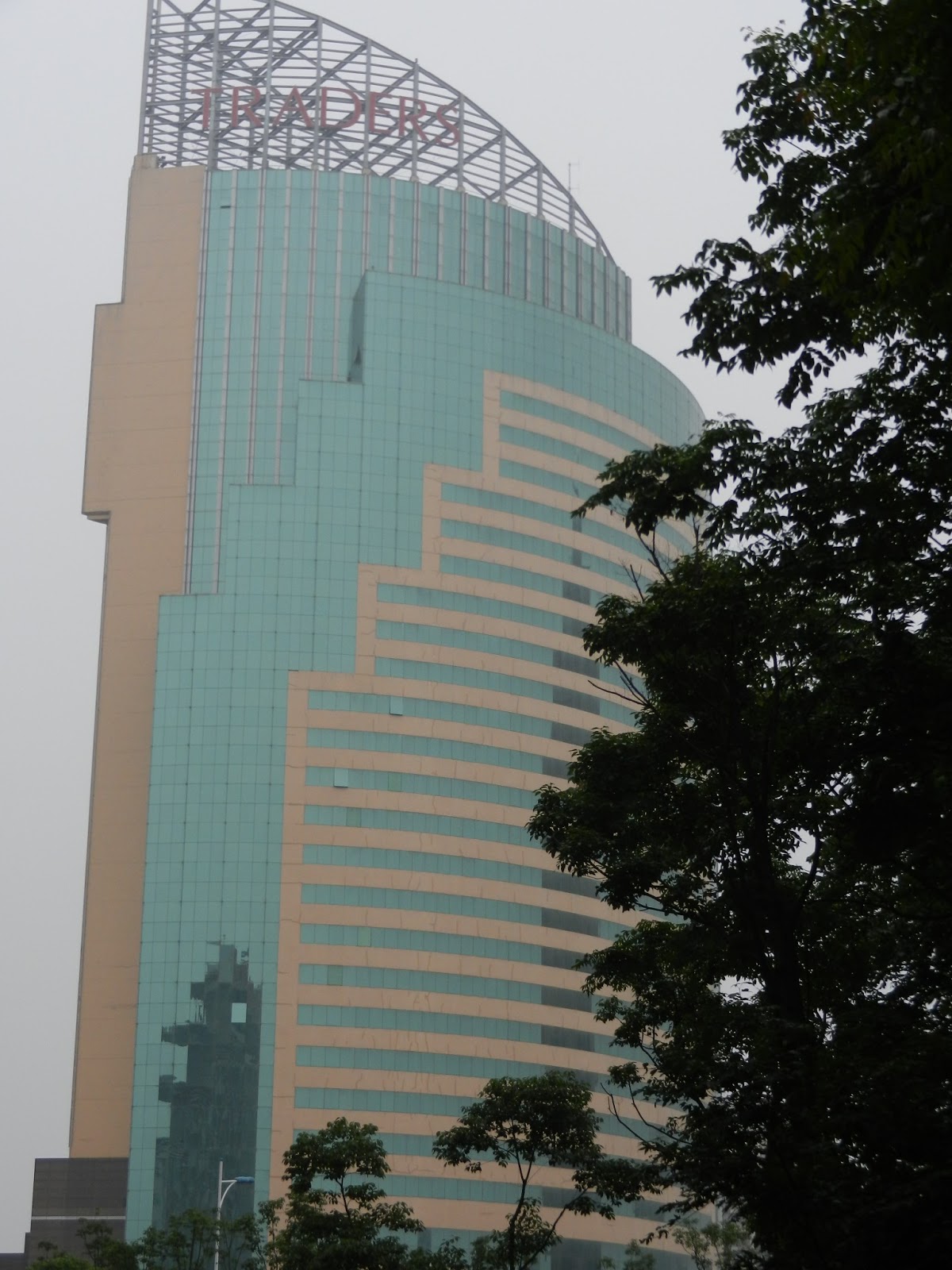