Day 71. The blizzard and the wine.

So a freak blizzard came through town.  And by freak, I mean that I didn't pay close enough attention to the weather forecast so did not properly plan for blizzard like conditions. (In my defense, the weather men led me to pay too close of attention to the major snow event coming Thursday so I missed the potential significance of an inch of snow and crazy wind speeds today.) My bad.

These are the days when living 50 miles from work is a problem.  Don't worry mom, I had all my emergency gear, just not my overnight bag.

Around 3 pm, just like predicted a tiny bit of snow along with 45 mph winds showed up.  I actually got on the interstate to go home thinking it wasn't slippery so it had to better than the day I drove on a sheet of ice the whole way.  (Terrifying that day was, in the top two of worse driving experiences ever.). Today was scarier.

It wasn't slippery, at least not very, but ZERO visibility. I could not see the white lines on either side of my car.  Almost everybody, including me, had their hazard lights on praying, I assume since that is what I was doing, that some crazy moron wouldn't come barreling up from behind and get out of control trying to pass.

Most mornings and evenings recently there are at least two cars in the ditch.  One particularly scary incident occurred right in front of me. A pickup truck, not going any faster than me although he was in the icier lane suddenly just drifted sideways, then drifted in front of me, then slid into the ditch in the middle if the interstate, and slid through the ditch coming out on the other side into traffic.  Talk about a reminder about ice.  No accident occurred, boy was that guy lucky.

So today I got off the interstate at my first chance, I turned around and went and had wine.  Much better choice than driving 50 miles with no visibility.

(I called my husband when I got off the interstate and he said he had been trying to reach me to tell me about the whiteout in Brandt.  I had also thought maybe I could make it because maybe it was just bad around where I work. But Brandt is about 2/3 of the way home.  It would have been a rough drive all the way.)

On an up note, winds will die down tomorrow leaving us to enjoy a high of -2.   Brrrrrr.  I think I will have more wine.

See on.  (And my blizzard picture totally does not do today's wind justice.  Sorry. But I was anxious to get to the wine.) 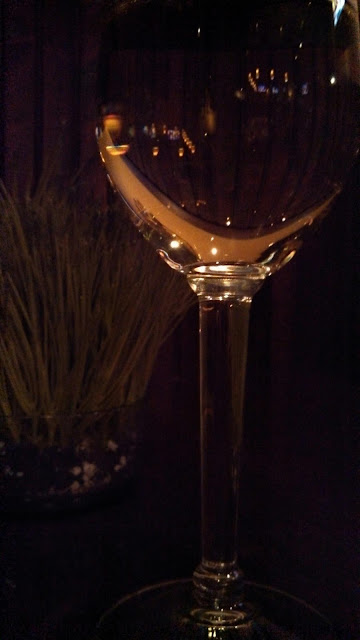 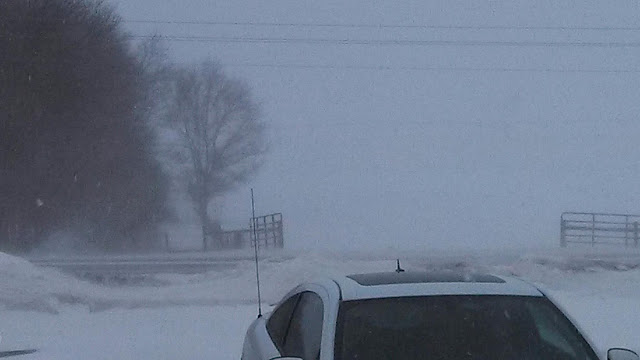