Last day of vacation. A final day skiing at the Lutsen Mountain.  From the one picture I took today, all appears to be going well...

Indeed the start of the day went well despite essentially ice to ski on.  (I am not sure what I thought would be the result of the inch of rain yesterday, but it wasn't as much ice as was there.)

I am an intermediate skier, at least on snow.  On ice it was back to beginner level. But by midday I was ready to try a blue run with the group. However because I was slow I got behind. Then, since the hill was a sheet of ice and got really steep I fell down. By the time I managed to get up none of the group was in sight, and the options in front of me all seemed equally terrifying.

I made the mistake of asking someone else which way they thought would be the easiest.  He honest to Pete laughed. But then he said that Moose Access was probably pretty easy and would be out of the main hill traffic.

What he failed to share was that Moose Access went to a totally separate mountain. A. Totally. Different. Mountain.  I was on Eagle mountain. My group expected me to meet them at the bottom of Eagle mountain.  I realized I was in trouble as passed all the ski hill condos and found myself on a very narrow run where there was no one else.

Luckily cell phones worked. And I called my husband and told him I was lost and that he needed to come find me. (He is an excellent skier, so I knew he would find me.) I had a sign in front of me that said 'Moose Access' so all he needed was a map.  He did find me after about 15 minutes. Thank you husband. You are the greatest!

Now after a while of standing around waiting for him, I kind of realized that I knew where I would end up, at the bottom of a chair lift at Moose mountain. We had skied Moose mountain several times.

But it was a long way from where I wanted to be and the ski lifts on Moose mountain closed in less than 30 minutes.  So there was a tiny bit of panic.

But all turned out well, and I even had time to get a few extra runs in back on the Big Bunny ski run.

Back to more meaningful photos tomorrow. 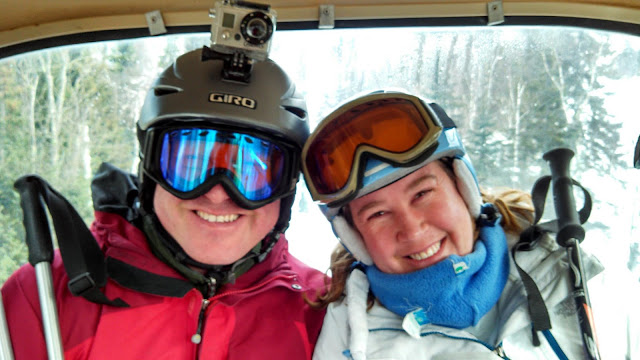