It's deer hunting season in South Dakota.  So I suppose it is logical that the only deer I would see would be running.

While I am not a hunter, I, like many photographers, love wildlife.  I haven't yet spent hours and hours sitting and waiting for a great wildlife shot, but I do keep alert, always hoping...

Well, I was out driving around some back roads, figuring maybe I would see some deer out wandering.  (Occasionally on my way to work I will see a couple, but I'm on the interstate driving to work, and while I have pulled off to take a picture, it's rare, because it's a little scary even when I pull waaaaaay off to the side.)  But on these back roads there are miles and miles of open fields.  Surely some sort of wildlife would be out and about.

The picture I covet is of a hawk sitting on a hay bale.  I've seen lots of hawks on signs and fences off the interstate, but am hoping one day for this perfect shot:  a field full of hay bales, and on one of the bales closest to me, a hawk on top.  Maybe hay bales are too low to the ground?

Anyway, I was driving around and this flurry of deer ran out in front of me.  I suppose with hunting season on, the deer aren't just 'wandering' this time of year.  They were fast.  Worry not, I drive about 40 miles per hour or less when I'm out looking around, so hitting the deer wasn't a remote fear.  Also fear not fellow drivers, I pull over and let people who come up behind me pass, so my slow driving isn't slowing others down.  But I am paying attention to traffic - which there usually is none - I love that about South Dakota.

As luck would have it, this was the only time a car was coming in the oncoming lane, so I was paying attention to him at the same time I was trying to get my camera out, roll down my window, and frame a shot.  Out of three shots, this was the only one where I successfully got the deer before they disappeared into a grove of trees.  I waited for a few minutes, but never saw them come out of the trees.  So this is my picture. 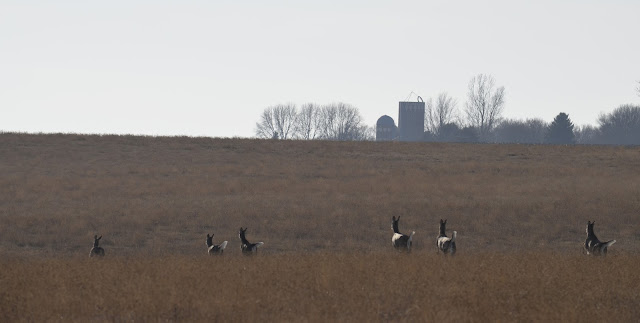 South Dakota.  Open fields, wildlife running for their lives.  (Poor deer.  Nobody was actually hunting them when I was out, but I suppose they run to get hidden as quick as they can.)
Posted by Unknown at 9:23 PM